Birmingham’s music is finally getting the credit it deserves.

I was listening to a programme on Radio Four the other night. It was called Music Made in the Middle, presented by local hero Jamelia and told the story of Birmingham and the West Midlands’ musical history over two programmes of nostalgia and information. 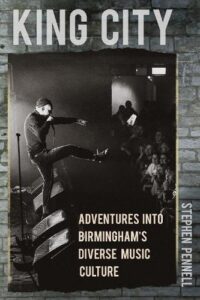 Not only were the usual suspects wheeled out but there was also a lot of unknown facts and unsung heroes presented that showed the depth of the region’s musical heritage. Grosvenor Road studios, where the early Birmingham bands first recorded, the Town Hall and its history going back over two centuries, long-lost but not forgotten venues. A lot of well-known names such as Toyah and Kevin Rowland were interviewed although the best insights came from those who are still around on the local scene and still keen to promote, plug and publicise what’s still going on here.

One of the people interviewed at length was a contributor of ours, Stephen Pennell, which reminded that it was about time I gave a plug of my own, to his acclaimed book King City. First published in 2021, King City tells the tale of what’s going on in Birmingham now and over the past few years. Reviews, previews, interviews. Comment, opinion, rant. It’s heartfelt and passionate, which is hardly surprising as anyone who’s ever spent five minutes in his company will testify – he’s about as compromising as a Black Sabbath riff or, if you prefer, a Steel Pulse rhythm.

Stephen Knight’s opening ceremony for the Commonwealth Games was memorably described as a love letter to the city; King City is street art on paper. Loud, proud and colourful.