Self-interest, deceit, entitlement. These are the traits which drive the plot and comedy of All’s Well that Ends Well. Sour though they are, these traits also draw us in, raising the question: in Shakespeare’s characters, how much do we see ourselves?

Helena, of low birth, is given free rein to choose a husband after she cures the King of France of an illness. She declares her love for Bertram, son of the Countess of Rousillon, but he, shallow and petulant, wants none of it. Not unreasonably, he requests permission to choose his partner for himself.

Delighted by the prospect, the King adds bullying and intimidation to the ugly temperaments already on stage. Forced into the marriage, Bertram runs off to war, where he demeans himself yet further. Warfare is more important than women, their role being purely to satisfy his lust. When Diana, the object of his lust, and Helena swap places in his bed in a plot to get him to acknowledge the marriage, his inability to tell one from the other shows him as foolish, in addition to his other faults. 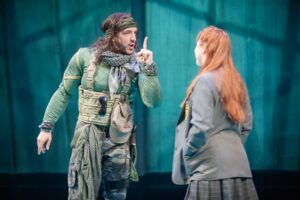 The play end on a cynical note. Bertram reconciles himself to his marriage, and the elders are satisfied. But his decision is the result of coercion, and it remains to be seen whether he has any affection for Helena. Meanwhile, she is married to a man who has shown himself to be dissembling and immature. As a result of pressure by their elders, the future of the younger generation is in doubt. Does it really all end well?

Bawdiness runs rife throughout the play, and not just amongst the men. Helena, played by Rosie Sheehy, is strident, feisty. Unafraid to step outside the norms of the time, she is sufficiently self-assured enough to talk about her sexual desires.

The comedy of the war scenes is well developed, with the character of Parolles, brilliantly played by Jamie Wilkes, the butt of many jokes. The portrayal of warfare is full of contemporary resonance: key soldier roles are played by women, whilst back projections show use of remote control bombers. Something of the reality of today’s conflict zones is portrayed through lighting which flares across the auditorium, along with explosive sound effects.

Back projection is also used to convey the way in which the lives of today’s young people are lived out in the public domain through the pervasion of social media. The pressures on our younger generation is placed squarely within the experiences of characters of Helena and Bertram.

The older generation is strongly played: Bruce Alexander, as King of France, is a strident bully, whilst Simon Coates as Lafew, is entitled and lacking in empathy. Claire Benedit as the Countess is kindly and measured, yet still commanding when it serves her interests.

Altogether, this is a thought-provoking production which lingers in the mind. Perhaps the over-riding sentiment conveyed is that of human vulnerability, exposed so well as Paroles strips off his clothing we see the muscle chest costume beneath. As his does so, he acknowledges his own weaknesses: “It shall come to pass that every braggart shall be found an ass.” Maybe the joke is on all of us in the end.

The production was directed by Blanche McIntyre.

All’s Well that Ends Well is at Stratford until 8th October. Tickets and more information at rsc.org.uk