Dave Woodhall watches a band and reads a book.

I was on the bus the other night when someone started talking to me. He reckoned to have had a lengthy and often lucrative career in the music business roadieing for, amongst others, ZZ Top, Tina Turner and Michael Jackson. Never mising the chance to name drop I threw in a few of the people I’d interviewed or worked with myself. I don’t know whether he believed me, or for that matter whether I believed him. Never mind.

I was on my way to the regular Tuesday Henry’s Blueshouse gig at their new home, the Velvet Music Rooms on Broad Street. Round the corner from Henry’s old place at the Bull’s Head, the venue doesn’t on first appearances seem a likely candidate for the sort of acts Henry’s promote, but as a way of putting live music into the area they’re doing a good job. 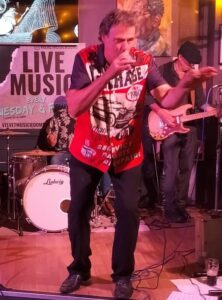 The night’s entertainment came in the form of Big Jim’s Alabama Boogie Boys, from downtown Quarry Bank. Many years ago Jim Merris sang with the Red Lemon Electric Blues Band, who as they were once memorably described, didn’t do much in the way of originality but did it well. Jim’s current outfit have moved away from the soul-tinged blues of the Red Lemons and have a more rockabilly feel to them. Again, nothing particularly original but they know how to play and the audience, including local legends Colin Gabbidon and Steve Ajao, knew how to enjoy themselves.

While I was watching the band I saw promoter Jim Simpson and got hold of a copy of his latest book, Dirty Stop Out’s Guide to 70’s Birmingham, written in conjunction with his brother Ron. As you can imagine from the title, the Guide tells the story of Birmingham’s entertainment scene throughout the decade. From ELO to the Nightingales, the Elbow Room to the Opposite Lock, Nelson House to the King Kong statue, Eddie Fewtrell to Patti Bell, it’s all in here. Names, places, dates, this is a fascinating and incredibly detailed account of the decade that taste might have forgot, but enjoying yourself certainly didn’t.

Music, fashion (the band as well as what to wear), local heroes and cult figures; they all find a place There’s also a chapter on football, telling the story of the last time that all the three – if you stretch the city’s boundaries a few hundred yards – Birmingham clubs were making news on and off the pitch. Jasper Carrot penned the section on Blues, modesty forbids me from pointing out the identity of the Villa author.

Of course, bearing in mind who wrote the book, one record label features prominently. That’s understandable, because this was a time when Jim’s Big Bear empire was releasing some of the finest music ever to come out of the city, even if it invariably didn’t get the success it deserved.

If you were around Birmingham during the seventies, this book will bring back so many memories. If you’ve only heard the stories from parents, friends and older family members, it will confirm them. And in one of the evocative photos that illustrate throughout, the bloke on the bus might be hidden away in the background.