Helen Annetts, Lily Annetts and Joe Statham have a riotous time at the Rep.

As we left the Birmingham Rep last night – our faces hurting from smiling and our hands stinging from clapping – I said to my niece Lily who has been able to join us for the last two days in buzzing Birmingham, “I can’t top this, I can’t image your next visit being this good!”

To be fair, the fates had collided so that we had Birmingham 2022 Commonwealth Games tickets AND tickets for the Rep, but the whole town has been buzzing and I am going out on a limb by saying these last few days in Birmingham have never felt so exciting, inspiring and fun. I’ve almost been surprised by my pride in my adopted city as I lead with my Northern-ness but after thirty years of being in Birmingham, the Midlands, maybe its time to accept my love for the place! 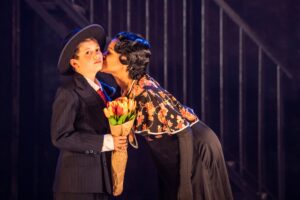 Anyway, I digress; back to the wonderful Bugsy Malone. And it was wonderful. My youngest didn’t know the film and when he asked what it was about, I panicked and said prohibition, which didn’t sound too fun. Then I got lost in a poor description of children playing adults in a musical about gangs, and so for him the characters, the songs and the story were all new.

And in a world of virtual reality, animation and video games, the staging and the effects in the show blew him away. So simple, he kept saying but so, so effective. He’s been inspired to write his own review – see below.

The young cast were amazing – funny, owning the stage and their characters, and with amazing voices. My niece and I were particularly blown away by Blousey, played by Mia Lakha whose voice was amazing; she played the role almost effortlessly and Bugsy (Gabriel Payne) whose cheekiness made his knockout performance in the second half of Down and Out even better. We thoroughly enjoyed Albie Snelson’s Fat Sam bringing much comic timing to the stage, with Jasmine Sakyiama as Tallulah, Aidan Oti as Fizzy, Desmond Cole as Dandy Dan and Cherry Mitra as Lena/Babyface creating a perfect core cast, playing brilliantly off each other.

The staging was excellently done, simple and effective. I most enjoyed my son’s response to the staging and the effects; as much as the cast on the stage, the set and the props are what create the magic of the theatre. The one thing I would have liked, and I appreciate the difficulties in a live production, is MORE splurge. My youngest didn’t get that’s what it was at first, and I know it’s hard but to have had more of the gunge/splurge for the final ‘fight’ would have been a lot of fun to see.

Now over to Joe Statham, aged ten, for his review:

So, on Friday I went to watch Bugsy Malone The Musical in the Birmingham Rep. I loved watching this, I loved the acting, I loved the singing and the music, I loved the humour and overall it was brilliant.

My favourite part of the show without a doubt is when just before the interval both gangs were in Fat Sam’s car – not including Dandy Dan. I loved how every second the lights went out and they changed pose creating a wonderful effect. I would definitely recommend this show to others.

And so a definite hit for us. We would strongly recommend a visit to families and if you are in town soaking up the Birmingham 2022 atmosphere then a visit to the Birmingham Rep to see Bugsy Malone will make for a proper memorable day. We’d give it 4.5 stars, and the full 5 if there were a tiny bit more splurge.

Bugsy Malone is at Birmingham Rep until 14th August. Tickets.