Staffordshire-based Freedom Brewery is set to host the first ever Freedom Sessions stage at this year’s Big Feastival.

Helping to amplify and support local talent, the popular Midlands beer brand is launching the Freedom Sessions stage, with unsigned acts secured from across the region.

Running from Friday 26th to Sunday 28th August at Kingham in the Cotswolds, Big Feastival is the top summer festival for food, drink and music lovers. 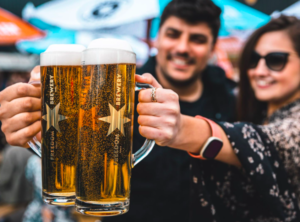 Following on from being the lager sponsor of last year’s festival, the Freedom Brewery team is thrilled to be back bigger and better this year with a larger bar and live music every day of the event.

Many of the acts playing on this new stage have performed at Freedom Sessions events in bars and pubs across the country, or applied via the call out from the brewery earlier this summer.

Local talent set to get the crowds going over the bank holiday include Birmingham’s own Call Me Unique who performed at a sold out Freedom Sessions event earlier this year.

Speaking about the brewery’s ambitious plans for this year’s festival Head of Marketing for Freedom Brewery, Laura Mitchell, says: “The Big Feastival has become one of the UK’s most popular family festivals for food and music lovers and we’re thrilled to be back bigger and better than ever – quite literally. Our bar is now over 14m long and we’ve got the added bonus of our own stage.

“At its core Freedom Brewery is about making great quality craft lager accessible, and embracing independent Midlands talent. We’re delighted to be able to showcase some of the excellent acts we’ve hosted at our Freedom Session events over the last 6 months, and we’re sure our stage and bar combo will be a crowd pleaser.”

Freedom brewery is an independent craft brewery located at an award-winning eco-friendly brewery in the heart of rural Staffordshire. Laura says: “Born bold, determined and independent, we started as we meant to go on – born to brew beers better – and remain proudly independent to this day. Everything we do at Freedom is to make a better beer; better for taste, better for you, better for the environment around us. We go the extra mile to brew our beers and do things a little differently; beers that are refreshingly natural, delicately balanced and vegan, that deliver on quality and taste, every time.”

Now in it’s 11th year, Big Feastival runs across the August bank holiday and is held on the farm of Alex James from Brit-Pop band Blur. The Freedom Sessions stage will be open across the weekend and is included in the ticket price for visitors.