Mughal Miniatures to give festival audiences a preview of new production.

Visitors to Birmingham International Dance Festival on Friday 24th June will be given the first preview taster performance of Mughal Miniatures, ahead of its much larger outdoor production, performed by Birmingham’s award-winning Sonia Sabri Company.

Mughal Miniatures celebrates the deep-rooted cultural, political and human links between Birmingham and the Indian subcontinent and is inspired by Mughal Miniatures, tiny, highly detailed Indian miniature paintings that can be traced back to the ninth century. These, delicate handmade paintings, had a multi-cultural approach influenced by Indian literature and drawing on styles from Persia, and Europe. The paintings are a blend of bold, bright colours depicting courts, nature, animals and more. These paintings were intricately precise with some brushes containing just one single human hair.

Mughal Miniatures will create living versions of the tiny paintings depicting scenes of Indian royal courts and the glory of the Mughal period with a contemporary, humorous, and upbeat manner questioning the perception of woman. 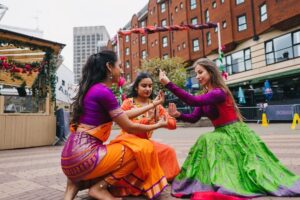 The performance will feature dance, brand new music, theatre, puppetry and intricate colourful costumes. These beautiful and ornate scenes will transform from still pictures into bursts of dance and music, before returning to well-behaved stills.

Surrounded by brilliant reds, blues, greens, pinks and golds, willing audience members will be invited to become part of these interactive ‘living pictures’, taking on roles within the scenes, perhaps fanning the blue-skinned God Krishna or learning a short Kathak dance to please Akbar the Great.

One of only a handful of British South Asian professional female choreographers in the UK, Sonia was recently invited as Associate Choreographer for Motionhouse’s Wondrous Stories, a large-scale event which officially launched the six-month long Birmingham 2022 Festival earlier this year.

Sonia commented: “Mughal Miniature paintings were the Instagram of the period and a perfect archive of how people lived during the time of the Mughal Empire. This is our homage to all those talented artists who produced such incredible art and a preview taster of the much larger outdoor production to come.”

Mughal Miniatures has been created with the help of women from Saheli Hub in Balsall Heath who have shared artwork and stories which will play a significant part in the performance.

Sonia added: “The production is an expression of the people that make up our city, in particular marginalised women. Many participants from Saheli are from underprivileged and underrepresented communities and their contribution has helped them to discover themselves as valued members of society who have a voice through art, weaving their creative ideas and lived experiences into the show.”

Music for Mughal Miniatures is composed by Sarvar Sabri the internationally renowned Tabla maestro who comes from a long line of Indian musicians and is the husband of Sonia Sabri. Previous work includes City of Birmingham Symphony Orchestra. The company also includes Dancer Kinga Malec an accomplished performer and choreographer of Indian dances; Sue Buckmaster, Dramaturg  is the Artistic Director of Theatre-Rites, a puppetry expert and the fifth generation of theatre practitioners in her family; Aakanksha Rawat, Dancer originally from India and part of Sonia Sabri Company’s teaching faculty and Shreya Vadnerkar a British-Indian dancer specialising in Bharatanatyam and Bollywood dance as well as having trained in Folk, Tap, Modern and a new found passion for Breaking (Breakdance) over the years. Set design is by Ella Barraclough.