For the first time ever, the BBC Proms is taking its successful chamber music series across the UK this summer – and Birmingham is one of the dates.

The world class mezzo-soprano, who is an alumna of Royal Birmingham Conservatoire, won the 2021 Dame Joan Sutherland Audience Prize at the BBC Cardiff Singer of the World, one of the most prestigious international singing competitions. She is now a sought-after voice on both the operatic stage and the concert platform, with one critic writing that she “stole the stage at every movement” in English National Opera’s recent The Cunning Little Vixen. 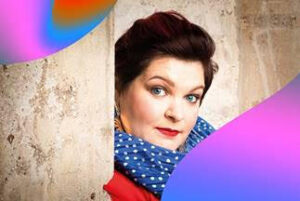 In her Proms at Bradshaw Hall lunchtime concert with pianist Simon Lepper, she includes the world premiere of a new work by Errollyn Wallen – a Royal Birmingham Conservatoire composition tutor – plus music by Proms featured composers Ethel Smyth and Ralph Vaughan Williams in his 150th anniversary year. She’ll also bring all her theatrical flair to a Shakespeare sketch by the late Joseph Horovitz.

Claire Barnett-Jones said, “It is an absolute honour to have been asked to create and perform a recital for the BBC Proms this year and also very special to be performing as part of the inaugural ‘Proms At’ series at the Bradshaw Hall, Royal Birmingham Conservatoire, where I spent my formative years. In devising the programme I wanted to feature two of the highlighted composers in the Proms, Ethel Smyth and Ralph Vaughan Williams, but was also delighted to be able to commission, with the BBC, a world premiere piece by the marvellous composer, Errollyn Wallen.”

The BBC Proms chamber music series was established in 1996 and Birmingham is one of nine dates in this year’s series, the first to visit all four nations across the UK. A diverse range of world-class soloists and ensembles will appear in repertoire ranging from Haydn in Glasgow to Xenakis in Belfast.

Proms at Bradshaw Hall, Royal Birmingham Conservatoire, with Claire Barnett-Jones is on Monday 29th August, 1pm. Tickets are £12, on sale from Saturday 21st April from BCU.