The Birmingham Bears team has hidden five pairs of tickets in five popular locations in Birmingham and Solihull, with a total of 25 pairs up for grabs. Those joining the Bear Hunt are being encouraged to search for hidden white envelopes which hold two tickets – one for the lucky winner and a guest of their choice.

The Bear Hunt will launch on Monday 9 May and the team is calling on fans and local people to visit the participating venues to search high and low for the exclusive envelopes.

Tickets will be hidden in Touchwood shopping centre in Solihull, Birmingham’s Colmore Row, Mailbox and Brindleyplace, as well as special routes on West Midlands trains – so the hunt is officially on! 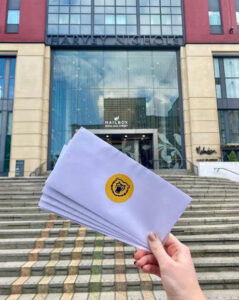 Each winner will take home a pair of tickets for a future Birmingham Bears home fixture, with the team hosting seven T20 games at Edgbaston Stadium during May and June.

With just over two weeks to go until the opening game of this year’s T20 season, the team are gearing up for an exciting set of match days, beginning on Thursday 26 May when the Bears take on Northamptonshire Steelbacks at Edgbaston.

The home campaign will end with the eagerly anticipated local derby with rivals Worcestershire Rapids on Friday 24 June – a match that is expected to be a near sell-out.

A match ticket for a Bears game includes so much more than just the cricket, with kids inflatables, live music and free giveaways for all.

Chris Airey, head of marketing at Birmingham Bears, said: “We’re so excited to welcome fans of all ages to Edgbaston this summer, for what promises to be a fantastic season of Vitality Blast T20 action.

“Our exclusive Bear Hunt giveaway is a brilliant opportunity for fans, friends and families to be in with a chance of winning tickets to the team’s upcoming home fixtures – where they’ll have the chance to soak up the unmissable Edgbaston atmosphere.

“With fifty hidden tickets up for grabs, the search is officially on, and we look forward to welcoming all those who find tickets to a Bears game this May or June.”

For those who aren’t lucky enough to find one of the hidden envelopes, tickets start from just £15 for adults. A wide range of tickets are available including group offers for bookings of six or more, while under 12s go free and 12 to 15-year-olds are just £5.

For more information and to book tickets online, visit here.