Simon Hale is enthralled by a modern twist on an old classic.

Beauty and The Beast may have been conceived centuries ago but its themes of love, sacrifice and forgiveness remain as powerful and relevant as ever.

In the new touring production of Disney’s musical of the fairy tale, with lyrics by Howard Ashman and Tim Rice and book by Linda Woolverton, which has arrived in Birmingham, these themes come thrillingly to the fore in a theatrical tour de force. A special night too for Grace Swaby-Moore, called on as the understudy to play Belle, the bookish country girl who agrees to take the place of her father as a prisoner of The Beast.

Swaby-Moore acted, sang and danced the role as if she had been born to it, as a sweet but also spirited character with terrific on-stage presence and vocal range. 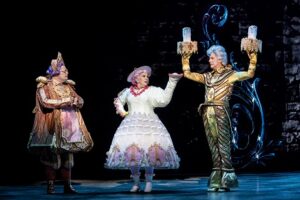 While she carried the show, there are strong performers from all the regulars, not least Shaq Taylor as an impressive Beast, scary but not to the point of frightening the children too much.

Gavin Lee as a Lionel Blair-like Lumiere and Nigel Richards as a Ronnie Corbett-like Cogsworth are a hoot as panto-like fellow prisoners in the Beast’s castle using all their guile to make Belle and the Beast a redeeming love match. They also introduce the best set piece for the song Be Our Guest– a marvellous Busby Berkeley-inspired routine with sequin-dressed women parading as dinner plates and feather dusters.

Hilarious too are Samantha Bingley as a Wardrobe ever ready to reveal the contents of her drawers and Sam Bailey whose sings the title song as a tea pot both movingly and suitably warmly.

There’s a beautiful tearjerker from The Beast himself in his big number If I Can’t Love Her, in contrast to the Belle sung with barely disguised double entendre by Tom Senior as the village rake Gaston.

Also deserving of the plaudits are the amazingly colourful costumes by Ann Hould-Ward and lavish sets by Stanley A Meyer that you wouldn’t normally expect with a touring production. Stunning pyrotechnics also take the show thrillingly from the page to the stage with magical ingenuity, while the live orchestra conducted by Jonathan Gill excels in playing the romantic Alan Menken-composed score.

A feast for the senses, this is a production not to miss.

Beauty and The Beast is in performance at Birmingham Hippodrome until Saturday, March 26th. Tickets.