A celebrated award-winning journalist and author, who, as a war correspondent was on the last flight out of Afghanistan before the US and UK finally pulled out, is to be a guest speaker at a Birmingham Press Club lunch on 24th March.

Australian-born Lynne O’Donnell (pictured), who has an MA in War Studies from King’s College, London, where she is a visiting research fellow at the Institute of Psychiatry, Psychology and Neuroscience, was, between 2009 and 2017, Bureau Chief in Kabul for The Associated Press and the French news agency AFP.

Birmingham Press Club chairman Llewela Bailey said: “Lynne is an incredible journalist whose assignments have seen her reporting from war-torn Iraq and Afghanistan, from China and on political unrest in the Middle East.

“In her highly-praised book, High Tea in Mosul, Lynne captures the extraordinary true story of two Englishwomen who married Iraqi men and lived there for thirty years including time spent under the misery of Saddam Hussein’s dictatorship and the civil war which followed his downfall.”

The Press Club lunch (12.30 for 1 pm) is being held at Edgbaston Golf Club on Thursday, 24th March. Tickets are priced at £35 (including VAT). To confirm a booking please email Press Club vice-chairman Fred Bromwich at fbromwich@me.com 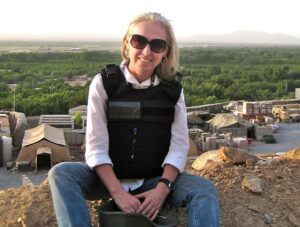 Lynne, who started her journalistic career in her native Australia, has worked for newspapers, magazines, radio and three major international news agencies. Based in China for almost ten years, she was Asian Features Editor for Agence France-Presse, and while living in Istanbul she wrote for publications about unrest and political situations in the Middle East
She has also worked for a number of periodicals, including the Australian, for which she wrote on the war in Afghanistan.
In 2011, Lynne won the Amnesty International Human Rights Press Award for her series of stories on Afghan women. In 2017 she became a fellow of the Dart Centre at the Colombia Journalism School. She regularly contributes research to think-tanks and multilateral organisations, focused on Afghanistan.

Her book, High Tea in Mosul, relates the story of two British women who moved to Iraq with their husbands, an Iraqi heart specialist and the man who would become the president of Mosul University, respectively, during the 1970s. The men had been living in England and attending school when they met their wives. The book discusses how the women adapted to the radically different way of life in Iraq, including the heat, the culture, the food, and the large, invasive families into which they had each married. However, along with this personal look into life in Iraq, Lynne, who was one of the first journalists to enter Mosul in 2003, includes the history of the nation during this period and how living conditions in Iraq altered over the next two decades, in great part due to the rise to power of Saddam Hussein.

The in-depth look at the lives of these two British women living in Iraq was ultimately an accident, as Lynne came across them by chance and was fortunate enough to be able to sort through their experiences to present a human side of the war.
High Tea in Mosul was published by Marshall Cavendish in 2008. Lynne is currently working on a new book, From the Frontline: Women Reporting War 1899–2020. She is a member of The Frontline Club, which was set up in 2003 in honour of colleagues on the Frontline News Television Agency who died pursuing their work. It exists to promote freedom of expression and support journalists, cameramen and photographers who risk their lives in the course of their work.

• Signed copies of High Tea in Mosul, will be available to purchase at the lunch.