Spain plays a leading role in Carlos Acosta’s exuberant production of Don Quixote by Birmingham Royal Ballet. Shades of flamenco and the clink of castanets; warm light streaming in and the vibrancy of the costumes: we are there in the hot market squares and the cool wine cellars of La Mancha.

Don Quixote himself is an intriguing character, seemingly at odds with time and place. In his world view, honour and gallantry hold sway, leading him to pursue idealistic, if deluded, goals. When he interjects in the action, it is to weave the story into his own particular narrative, to achieve a world where chivalry wins out.

The opportunities for deriving humour from this are well developed. Don Quixote sets out on his quest on a steed made of a wine cask, a horse’s head mounted at one end, and a mop-head tail at the other. Armour-clad, he believes he is the successor of medieval knights, and aspires to the same feats of valour. Whilst he is often to the side of the stage, a tall and lean presence, observing and reflecting on the action, his squire, Sancho Panza, short and rotund, is sometimes at its centre, a butt of jokes as he tries to join the dancing. 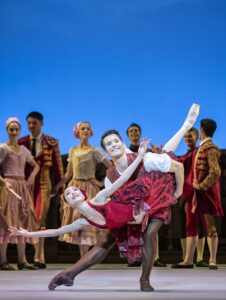 But in Don Quixote, we also see a character driven to eccentric behaviour by fears and suspicions within himself. Believing the windmill out on the plain to be a monster, he attacks it with his sword. His illusory behemoth is represented by dramatic clawed hands which appear at the end of the windmill’s sails as they turn in the wind.

Beyond the story, the dance in this production is spectacular. Momoko Hirata, in the lead female role of Kitri, is a joy to watch, whilst Mathias Dingman, performing the lead male role of Basilio, also excels.

There are showcasing moments for many other dancers, as soloists, in duets, or as part of the corps. Their seamless performances create an endless buzz and excitement on stage. The colour palette of the costumes is shown at its best in many of these moments, from the emerald green of the matadors, to the reds and russets of the gypsies. Humour is found even here: Gamache, a wealthy nobleman, dressed in mustard-coloured finery, shows his vanity to the world. When he weds, the matadors are equally robed in mustard, a wonderful comment on his foppishness.

Acosta’s production, created especially for Birmingham Royal Ballet, brings together the sheer delight and vitality of this company on stage, with an exploration of the enigma of its title character. In so doing, he reveals to us something of Cervantes’ early 17th century novel, in which Don Quixote, an individual with his own inner world is, albeit naively, determined to break the mould of convention.

A fabulous show to raise the spirits of young and old, these gloomy February days, Don Quixote is at the Birmingham Hippodrome until Saturday 26th February. Further information.

One thought on “Review: Don Quixote”