FLOW – Future Life of Our Ocean’s Wealth – is Imagineer’s Coventry City of Culture 2021 Project. A project in three parts – Navigate, Activate, Create – FLOW began with pupils in Coventry navigating the city’s blue spaces and culminates in April 2022 with Turning the Tide – An Ocean’s Fair curated by Imagineer’s Transformations participants and young environmentalists alongside Milesians – The Coming of the Gaels.

Created and led by Artistic Director Kathi Leahy and produced by Imagineer Productions with local, national and international partners including Circolombia and Johnny Donnelly, FLOW aims to engage children, communities and artists with Ocean recovery through a creative arts framework, inspiring and developing awareness, nurturing care and challenging everyone to consider both their own personal and our collective environmental responsibility.

Milesians – Coming of the Gaels will feature a professional and community cast and combine circus, aerial performance, live music and theatre to tell the ancient Celtic origin myth of the last invaders of Ireland. The project will see Imagineer develop their work through collaboration and creative professional international partnerships leaving a legacy for the city through bringing together local organisations like Rebel Manifesto Aerial and international organisations such as Circolombia. 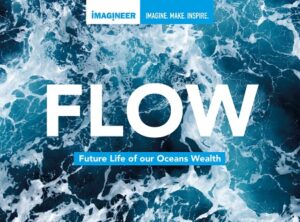 Peter Knott, Midlands Area Director, Arts Council England said: “We are delighted to be able to support Imagineer with £70,000 thanks to National Lottery funding to deliver FLOW, a fantastic project in Coventry’s city of culture year.

“The FLOW project has involved young people across the city to create something truly amazing, and in this latest part, local and international artists are bringing a genuine spectacle to Coventry. This project will also have a legacy of developing skills and encouraging artists in the city to work with people from around the world to realise their ambitions.”

Artistic Director Kathi Leahy said: “We’d like to extend huge thanks to Arts Council England, Coventry City of Culture 2021 and all our funders and partners for continuing to support FLOW. Not only is this a significant moment for young environmentalists to have their ideas heard but an opportunity to showcase the talents of the creative sector in Coventry and beyond as we tell the story of the Coming of the Gaels. Milesians is a tale with themes which still resonate today of migration, cultural identity, cultural co-existence and the ocean as the great connector.”

School pupils who participated in part one of the project, Navigate, are creating artworks which will form part of the Activate programme, Turning the Tide – An Ocean’s Fair. Imagineer and partners Media Mania are encouraging young environmentalist to help curate the programme for the Turning the Tide event. Turning the Tide will be a place to ask questions, have conversations and find out how to get involved in ocean recovery, take action and participate in the #30×30 campaign.

Following each performance of Milesians – The Coming of the Gaels there will be a post-show event, a curated showcase of community music and dance collaborations and cultural fusions from African and Irish diasporas.

Find out more about FLOW via the Imagineer website.