As Yamada explained from the podium: “Mozart’s music is known for looking beautiful but sometimes it has a deeper meaning, with major music including sudden arias.”

Turning to the sleigh bell beginning to the Mahler, he added charmingly: “Maybe Santa Claus is coming, bringing us dreams and fantasies I hope you can feel and see.” 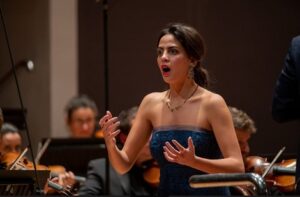 Dreams and fantasies were themes from the start in a thrilling performance of Don Juan, with solo violin and oboe representing the character as lover and libertine and four horns as the doomed swashbuckler living fast and dying young.

Egyptian soprano Fatma Said joined the orchestra for the Mozart with meaning, performing Vado ma dove? (I go, but where?) from the opera Cosi fan Tutte and Non piu di Fiori (No more flowers) from La Clemenza di Tito.

In each piece she perfectly captured her character’s changing emotions from a deceptive serenity to mournfulness as they anticipate the possibility of their death.

The post-interval performance of Mahler’s Fourth Symphony, scored in 1900 for the full orchestra the CBSO had on stage, beautifully conveyed the feeling of how life can move quickly from comedy to tragedy and back again, in both mystical and rapturous ways.

There were many stand-out solo turns but especially by Concertmaster and violinist Eugene Tzikindelean in his performance of a dance macabre in the second movement.

Said returned for the final movement to sing Das himmlische Leben (The Heavenly Life), a poem in which a poor child imagines heaven. So moved was the audience by her singing that it sat for a while in awed silence before giving rousing applause.

The CBSO returns to Symphony Hall on Wednesday, February 2nd with a programme of music by Beethoven and Berlioz: www.cbso.co.uk.