Giant versions of new maps championing the rich music heritage of Birmingham will be seen by hundreds of thousands of city residents and visitors following a collaboration between project Musical Routes and creative street advertising specialists Jack Arts, part of the Buildhollywood family.

A star-studded list of musicians and musical destinations including Duran Duran, the City of Birmingham Symphony Orchestra, Paul Murphy, The Que Club and Andy Hamilton MBE are immortalised in two different artworks installed at four 48-sheet size advertising sites in the city. 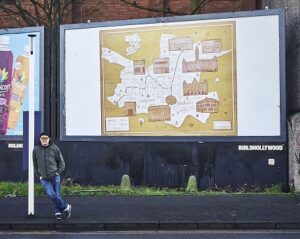 The hand-drawn maps celebrating the musicians and music hotspots that have emerged from the Ladywood and Northfield areas of Birmingham have been unveiled in Barford Street, Deritend High Street, Newtown Row and Watford Road.

Musical Routes was launched by reggae superstars UB40 in November 2021, with the installation of the first of thirty specially commissioned maps for the rail network at Hall Green Station.

The artwork will now be seen by hundreds of thousands of commuters, residents and visitors thanks to a partnership with Jack Arts, the culture-led arm of UK-wide street campaign pioneers Buildhollywood that places work with galleries, exhibitions, artists, publishers and other creatives in popular commuter and urban advertising hotspots.

Beth Baker-Wyse from Jack Arts said, “We are thrilled to be able to support Musical Routes on the Maps project; as we believe that our streets are fantastic spaces to connect with communities, and what better way to do this than to celebrate the iconic and infamous music scene that the city has produced?

“We feel that Birmingham is a magical city brimming with all kinds of people, lifestyles and cultures, and on this significant year for the city, we wanted to be able to remind its people of the incredible artistic heritage we are sure they are immensely proud of.”

The Musical Routes maps celebrate top Brummie artists Ozzy Osbourne and Black Sabbath, The Beat, Joan Armatrading, and Jamelia, along with many more, as well as profiling iconic venues such as Town Hall and The Rum Runner – giving visitors an instant insight into the stars that were born in the city and the venues that played host to them.

Birmingham Music Archive founder Jez Collins said: “We were overwhelmed with the positive response to the launch of the project late last year, and are in the process of rolling out the maps to all thirty rail stations in the Birmingham area.

“Thanks to the generosity of Tim and the Jack Arts team, we’re delighted that the maps – and Birmingham’s unique and globally renowned contribution to music – will reach an even wider audience.

“With the Commonwealth Games and Birmingham 2022 Festival on the near horizon, it is an important and exciting year for the city. As new memories are made and new stars are born we feel it is the perfect moment to champion and celebrate those who have helped pave the way for the vibrant and diverse music culture we see in the city today.”

The maps were originally conceived for the For-wards project created by Bobbie-Jane Gardner and were researched, designed and produced by artist Claire Hartley and Birmingham Music Archive. Thirty intricate 3D wooden versions of the maps have been produced by designers from Birmingham-based studio Space Play, and will feature Spotify codes that link to a curated playlist for each area.