Travelling to Brentford gave us a new year, a new ground to visit and the same old problems with picking a team. Tyrone Mings was suspended, Ollie Watkins out due to covid or whatever bizarre injury it was his turn to pick up and Morgan Sanson dropped to make way for John McGinn. The latest youngster you’ve never heard of to get onto the bench was Josh Feeney, one of the crop picked up from other clubs during the summer. Danny Ings got the chance to show that talk of offloading him during the transfer window is short-sighted if not downright daft, and there was also the opportunity for Steven Gerrard to succeed where three previous Villa bosses have failed and beat a club who invariably manage to out-think and often outplay us. 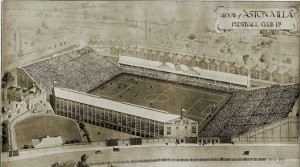 Both Ings and Gerrard got off to a good start, the player having one chance saved before opening the scoring after sixteen minutes, both times linking well with Emiliano Buendia. The manager must have been happy with this, as well as with everything else as Villa were on top throughout the first half. Unfortunately they couldn’t get another goal and the old failing of being unable to make chances count came back before the break, when a long range shot gave Brentford an equaliser.

Villa were still the better side after the break but were still unable to get the ball into the net, or even into many dangerous positions. Sanson replaced Jacob Ramsey and Trezeguet came on for the ever-erratic Betrand Traore with ten minutes remaining. The idea was that they might make a difference; unfortunately it was at the wrong end. Too much space for an attacker breaking into the box and although Emiliano Martinez did well to block the first shot, the ball dropped perfectly to give him no chance for the rebound.

The only thing of note after that was Trezequet’s laughably inept dive late on, which summed up the afternoon. Villa were the better team for long periods but were unable to kill the game off and as a result remain in the bottom half of the table. Whatever else Gerrard has done since he was appointed, even he couldn’t get anything against the latest set of oppponents to prove a regular irritation.

The holiday period has provided a reminder that while we can match most teams when everyone’s fit and on form, it doesn’t take much in the way of injury or off-days to bring us back to earth. As we saw again today, a couple out and the bench has to be filled out with inexperienced youngsters and the sort of player you hope rather than expect might be a game changer.

These two defeats have been the manager’s first real setback, and what comes next is his first real test. I don’t doubt that he’s up to the task, nor that now the transfer window is open he’ll be given all the help he wants. At least now we’ve got a break from the league with a trip to Old Trafford in what is undoubtedly our year for…