Debating the meaning, and the length, of life with comedian Mark Watson.

You’re touring with a new show. What can fans expect ?

“It’s been a bit of an odd path to this show because I’d almost finished writing it when the pandemic landed. What it was originally meant to be about was the fact I’d just turned forty last year a few weeks before lockdown began, there was a night when I couldn’t get to sleep and I started thinking about how short life is, for no particular reason. I downloaded an app which predicts your life expectancy.”

What was the result? 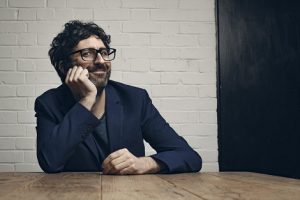 “It said 78. Of course these things are nonsense but it did make me think ‘If I’m basically through just over half my life what am I going to do to make the most of it?’ That was the inspiration and the original theme of the show, then obviously everything that has happened has made us all think a lot more about how frighteningly brief life can be.

“It’s been weird trying to grapple with the idea of just at the time when I’d got to this point and was thinking ‘Right, what am I going to do with life?’ and thinking about making myself explore the things I wanted to to make more of my life, it was the moment when we stopped doing anything. That’s been my year and a half and this show is a product of it.”

Is it all doom and gloom?

“It’s very far from doom and gloom really because it’s still a show with a lot of jokes. I’ve always had kind of big themes in my shows before but I never let that get in the way of having a good time. At the end of the day people want to be entertained and aren’t necessarily coming to see me solve the mystery of existence.”

“Good question. You’d think it would be the absence of worries – not having to worry about money or relationships for example – but without some sort of struggle I suppose life is kind of pointless. It’s all a bit flat. I’m still working on this, like anyone, but I think it’s to do with being completely at home in who you are, just feeling like the best version of yourself.

“These days they call it ‘living your best life’ and that has become quite a cliche but I see what people mean by it. You’re happiest when you’re definitely the person you’re meant to be. I think a lot of the time we’re not that good at doing that because there are so many pressures on you to earn money or achieve things in your job, there’s lots of things that come between you being fully yourself. But as you start to get older you realise there’s no time to mess about. You’ve got to try and pursue the stuff that makes you feel most alive.”

And what things in life do you find to be the most fulfilling?

“Another good question. I love the work that I do for a start – not just stand-up but writing and all the stuff I do. I’m lucky to have a job where I can be creatively fulfilled, express myself and do something I enjoy. I never lose sight of the fact that I’m very lucky to earn a living out of something that actually makes me happy, although I have struggled over the past year like everyone in my field. Work takes up a lot of your time and if it’s not something you enjoy it’s quite depressing to think you could be spending large chunks of your life not enjoying it but just getting through it to the good bits.

“I find fulfilment in the work I do and obviously being with my kids, although not always. There’s lots of stuff I enjoy, like running and watching football and things, but to bring it all under one heading: You’ve only got one life and I want to live as much of my life as I can doing stuff I actively enjoy rather than stuff I’ve got to get out of the way to get to something else. The more I can achieve that, the more fulfilled I am.”

As well as putting together a new show, you kept incredibly busy during lockdown.

“I did a huge amount of stuff. While lockdown could have been unfulfilling for comedians, it’s fair to say I was busier than most. I just keep myself creatively active. I did lots of online stuff, gigs on Zoom and other platforms. I did 24-hour long streams for charity three times. People said online stuff wouldn’t work at all or it would be massively alienating, and at first it was hard to find ways to do it. Audiences needed to get used to seeing stuff in little windows and we had to get used to building those communities, but once we got used to it on both sides it was a lot more fun than I thought it’d be. I also did shows in parks and different green spaces; anywhere you could get a licence to have 250 cars pull up to watch you perform, which is not everywhere. 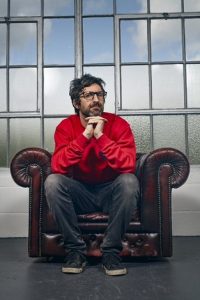 “Throughout last year I found different ways to do the stuff I do and while I’ve never been much of a tech-savvy person there are a lot of plusses. There are a lot of people who consume comedy in that way because they can’t get to live shows so I found I was reaching a different audience to usual. That was definitely a massive plus. The challenge now is working out how to serve both audiences, having an online component whilst bringing things back to life in theatres.”

You’ve done some warm-up shows. What are you most looking forward to about going back on tour?

“I’m proud of the show and have really enjoyed the preview versions of it I’ve done so far. I like travelling and going to different parts of the country, seeing audiences face to face and meeting people. Whatever you do online, it doesn’t quite match the feeling of being out and about. My whole life as a comedian has been endless touring. Some people complain about that but I like it. Part of the appeal for me is getting around. Of course travelling is a bit different now and you’ve got to be more careful so it’s not perfectly back to normal but we’re getting there.”

You’ve been hailed as a future national treasure. How does that feel?

“I can’t remember where that was first written but we’ve snapped it up and keep reusing it. I think it depends on how far in the future we’re talking about. Normally when someone is a national treasure you’ve got to be at least the age of Stephen Fry or Michael Palin. I don’t feel many people are national treasures until they’re at least into their sixties so we’ll see. I reckon I’ve got a fair bit of work to do and a lot more time before I earn that title.”