Another venue returns to live action.

One of our favourite venues has opened its doors again and is presenting a quality series of live events.

The award-winning Robin 2 in Bilston has a packed line-up of originals and tribute acts throughout September. Highlights over the next couple of weeks include:

On Thursday 2nd September Cats In Space will be harking back to the days of seventies classic rock with their twin guitar-led, grandiose live show that has seen them touring with such legends as Deep Purple, Status Quo and Phil Collins.
Tickets £19. 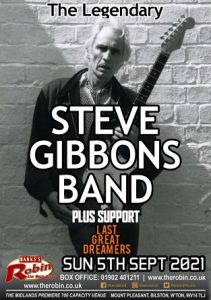 Robin regular and local legend Steve Gibbons returns to the Robin stage on Sunday 5th September. There’s not much more that can be said about Steve, whose career now stretches back over half a century and whose live show is still one of the finest around.
Tickets £13.

Punk originals Cock Sparrer will be performing on Friday 10th September. Formed in 1972, the band were punk before the term was coined and their r&b-tinged sound has been an influence on many bands since then.
Tickets £24.

Sons of Liberty are the UK’s very own southern rock band. Hailing from Bristol and south Wales, the band were building an awesome live reputation pre-lockdown with their authentic brand of rocking blues and last summer released their 2019 debut album Animism on vinyl. They will be at the Robin on Thursday 16th September.

More information on all Robin 2 events can be found at therobin.co.uk.