Tudor Grange Park was the venue for the delayed Solihull Summer Fest 2021.

Calling it the Solihull Summer Fest is tempting fate halfway through September, but it had been put back from July and the Autumn Fest doesn’t have the same ring to it. So with fingers crossed for the weather it was off to Tudor Grange Park for two days of pop where the old and the new met head on.

First up on Saturday were eighties soulsters the Blow Monkeys, whose well-crafted songs went down well with the growing 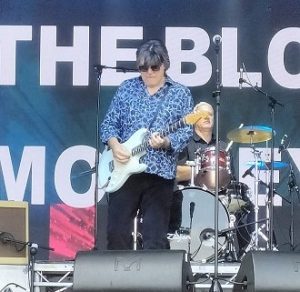 crowd, who began to recognise a few of the tunes they grew up with. A cover of the Curtis Mayfield classic Superfly went down well and a short but perfectly-formed set ended with top five hit It Doesn’t Have to Be This Way, the greatest song the Style Council never recorded.

Up next was garage duo Artful Dodger. I can’t say I’m a fan of their music or even know the first thing about it, but again they got the crowd going and their sampling of Wonderwall ended the set on a particular high as the sun shoe down on a crowd who were beginning to remember how to enjoy themselves again.

The feelgood factor rolled over into the next act on the bill and the first of the day’s former X Factor winners, Louise, who kept the crowd enjoying themselves with a bouncy set of non-stop action. The new kids were holding their own at this point.

Then it was time for another look back as the Brand New Heavies took to the stage with a selection of their acid jazz funk-tinged works. Kicking off with a soulful Midnight at the Oasis, they provided a laid back contrast to the more uptempo acts around them with yet more songs that reminded many of the audience of their time on John Bright Street (it was the Broad Street of the eighties for our younger readers).

I don’t know if Alexandra Burke still counts as new. It’s an incredible thirteen years since she first broke big and before pandemic struck she’d moved into musicals, which gave her show a theatrical edge that went down well with the growing audience, who enjoyed the hits and in particular a version of the Chaka Khan classic I’m Every Woman. One thing though – an hour of backing tapes can be a bit much, particularly after two previous acts had done the same. Live music should really be live, not that the audience minded as they danced along with the high-energy Alexandra and her backing troupe.

Marti Pellow certainly played live and had the crowd with him from the off. This was the kind of set that makes the listener 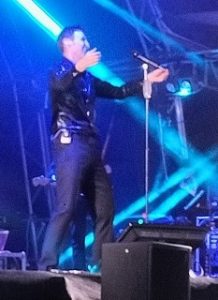 realise how many quality songs Wet Wet Wet recorded and the black-clad Marti with his band delivered. There was time for the Beatles’ With a Little Help From My Friends and Marti’s influences were shown when he finished the set with an obscure song from another sixties band, the Troggs.

The atmosphere that had been building all day reached fever pitch with the arrival of Saturday’s headliner, Olly Murs. He had a hard act to follow but managed it with as much ease as he moved round the stage, despite a recent injury incurred during an earlier show. Despite the number of hits that the acts had achieved with their own material, some of the day’s finest moments had been with other peoples’ songs and Olly was no exception as a medley of Earth, Wind & Fire disco classics was followed by Sweet Caroline, dedicated to Caroline Flack. The audience sang along louder than they had all day, then the bittersweet tribute continue with Troublemaker. For the crowd who had sung along with every word it was the highlight of an action-packed set and a fitting finale to the day’s events.

In setting the date for the festival the promoters had looked at weather from the previous twelve years, this weekend consistently being the best at this time of year. Unfortunately it was unlucky thirteen because the rain began to fall as From the Jam took to the stage on Sunday and continued on and off throughout the rest of the day. If it was hits you wanted this band had more to call on than just about any other act of the weekend and what began as a sparse crowd at the front of the stage grew as the set continued to throw out the anthems of a generation.

Nik Kershaw should have been a complete contrast to the three-minute bursts of Foxton & co, but both he and his band seemed surprisingly more rocky than the synth pop I expected. Not that this was a bad thing; he delivered another set laden with hits, both his own and those he wrote for others. Singing I Won’t Let the Sun Go Down On Me was tempting fate, though.

Luckily, ABC didn’t have any sort of weather-based tunes to call on. Martin Fry may have ditched his gold lame suit in favour of a natty black & red number but his delivery was as smooth as ever. No surprise here – polished pop was the order of the day from the opening bars of When Smokey Sings to the closing notes of The Look of Love. 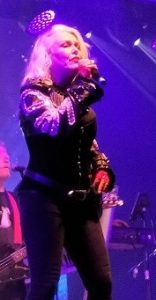 euphemistically be called fond memories. Unfortunately, two numbers in and the audience made it clear that while the sound at the front of the stage was fine, further back there were problems. They were quickly sorted, Kim began again almost from the beginning, there were no further problems and Kids in America got the biggest cheer of the day so far.

The night was drawing in, the rain returned and there was one act remaining. Tony Hadley has played this area so many times at so many different venues. He knows exactly how to deliver to an audience that, in turn, knows what they’re getting. His 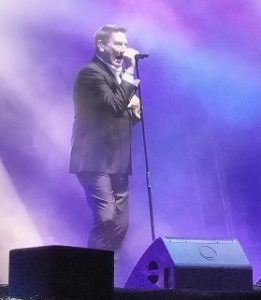 voice and his approach may have altered with the years, he’s now crooner more than new romantic, but the songs have stood the test of time.

A run of Spandau Ballet classics warmed the crowd, and as the set progressed the mask slipped slightly to allow the twinkle in the eye of this most consummate of artistes to be seen. Perhaps it was the Jack Daniels he sipped throughout the set. True and Gold were the showstoppers and as an added bonus the evening and the festival concluded with “Our generation’s My Way” – an arms waving, phone torch shining We Are the Champions.

And that was the Solihull Summer Fest 2021. Fingers crossed that the 2022 vintage will actually be in the summer.