The Mosley Folk & Arts Festival, to give it its full title, is one of the great misnomers of our time. It might have a folk edge to it, and there were more than a few beards, daft hats and hand-knitted jumpers in the crowd but it’s really for anyone who wants to enjoy themselves, listen to quality music regardless of label and immerse themselves in the atmosphere of one of Birmingham’s finest cultural displays.

If you’ve not been before, Moseley Park is a lovely place to hold a festival of this size; the slopes make a natural amphitheatre for the main stages and the hidden-away corners allow for other activities as well as meaning the food areas and bars can be hidden away from the serious business of the music. I loved the homemade, almost ramshackle feel of the park, yet that doesn’t mean the event was run with anything less than total professionalism.

After spending some time wandering round and listening to the music as well as looking at some of the displays, I caught the end of Peat & Diesel’s set, which featured a rousing Dirty Old Town – not, I would suspect, the first nor the last time this particular ditty had been heard in this setting. 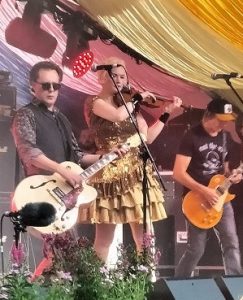 After that, it was straight off to the out of the way Kitchen Garden Cafe stage to sit on the grass and catch up with the legendary Attila the Stockbroker, godfather of ranting poetry. Attila’s settling into middle-aged nicely, still fired up about injustice and causes in which he believes – he begins the set with a passionate rant about the need for vaccination – but also mixing in the reality of growing older; reflections on bereavement, relationships and how he dealt with serious illness. Then just in case you thought he’s mellowed, a barnstorming tribute to Joe Strummer and he’s away. Some people refuse to get old.

There was just time to stroll over to the main stage for one of the highlights of the weekend, the Wonderstuff. In the circumstances you couldn’t pick many better acts to play as the sun was going down than (one of) Stourbridge’s finest. Like so many festivals as the summer draws to an end, both band and audience were united in a celebration of being back out there enjoying themselves.

Miles was on top form, plugging the local connection with tributes to Brian Travers plus reminiscing about Snobs and JB’s. The audience were moshing, swaying, singing along. Size of a Cow (“a song our fans hate”) got the biggest reaction both during and after, but there wasn’t much let up from set opener Mission Drive to the closing Ten Trenches deep. Credit to Erica as well, who would have stood out for her playing and stage presence even without the metallic gold dress.

And more was to come. There was barely time to walk the few yards from the main sage to the Lunar before The Nightingales were being introduced. If Rob LLoyd did anything as rock’n’roll as remembering an old venue it would have been Barbarella’s, although the Nightingales have probably not done anything vaguely rock’n’roll this century.

Some of the audience were longstanding fans, some had been attracted to the band by Stewart Lee’s already-a-classic King Rocker, others may not have even heard of the Nightingales until tonight but they were still entranced by the pulsating, understated yet powerful sound of the ultimate cult band.

The festival might have looked a bit rough round the edges but everything went smoothly, particularly the changeover times. 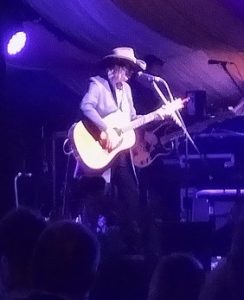 Barely had the final note ended from the Nightingales set when the Waterboys emerged onto the stage and a hero’s welcome. Opening with The Whole of the Moon is a brave move but it got the crowd into the right mood immediately and the singalong, reflective atmosphere continued throughout.

Mike Scott’s voice is perfect for this setting, the Waterboys are a great band to enjoy out in the open on a thankfully warm evening in late summer. The final, poignant, notes of the Rolling Stones’ Dead Flowers drifted into the night as the audience showed their appreciation of a memorable, magical occasion. The rest of the festival had some living up to do.