Ibiza Proms in the Park taking place at Tudor Grange.

The classic sounds of Ibiza are coming to Solihull in September as the prelude to a nostalgic and memorable weekend of popular music, film and entertainment at Tudor Grange Park.

The Secret Symphony will take to the stage on Thursday 9th September to transport guests on an evocative journey of Ibiza’s most iconic anthems. The 50-piece orchestra is renowned for its sell-out experiential and immersive orchestral shows and the 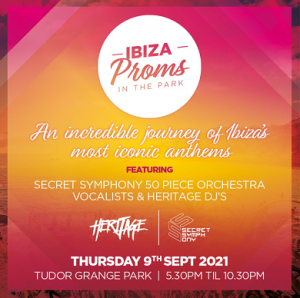 evening promises to be anything but traditional. Ibiza Proms in the Park will also feature a number of talented vocalists including The Voice UK finalist, Michelle John.

Heritage Nights will continue the theme during the evening by celebrating the 1980s and 90s tracks & DJs that influenced and shaped the genre into the phenomenon that it is today.

Alex Hammond, Heritage Nights said “We are very excited to collaborate with The Secret Symphony Orchestra and to be involved in this great uplifting local event. It fully promises to bring the spirit of Ibiza’s classic dance music to Solihull.”

Alongside the incredible entertainment the event will feature bars, street food vendors, performers, face painters and much more.

Ibiza Proms in the Park will be followed on Friday 10th September with Open Air Cinema presenting Bohemian Rhapsody, with a finale live performance from The Bohemians tribute band.