The RSC takes theatre outdoors in this production of Comedy of Errors, staging it in a newly built 500-seat amphitheatre in the Swan Gardens, Stratford. And this outdoor setting seems to have allowed the company to take off all the brakes in this riotous piece. Humour was wrung from almost every line, from every movement and from every facial expression. 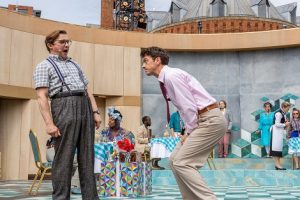 The Comedy of Errors

When Antipholus of Syracuse grows up, he sets off with his servant/slave, Dromio of Syracuse, to search for his brother. Reaching Ephesus, they encounter Adrianna, wife of Antipholus of Ephesus, Luciana, her sister, and various of their associates. Unknowingly, they become embroiled in the affairs of their respective twins.

Antipholus of Ephesus is barred from entering his own house, since his brother is dining inside with Adrianna. Antipholus of Syracuse becomes entangled over payment for a gold chain, presented to him unexpectedly by a goldsmith. Of course, confusion ensues, allowing for liberal use of slapstick, clowning, double entendre and farce, with a bit of ad-libbing thrown in for good measure.

Then there are the props, brilliantly conceived and used. In scene after scene, characters bring on armfuls of packaged merchandise, boxes tied with fancy bows, goods in branded carrier bags. Consumerism, it appears, is rife.

Costuming continues this theme: extravagant and eye-catching, costumes are used as statements about the characters. Appearance, it would seem, is everything. Humour is to the fore, but look beneath the surface as a deeper message is never far behind.

As the confusion develops, so the faith that the twins have in their own identities starts to falter; their certainty about who they are is cast into doubt by the behaviour of others. Troubled relationships are exposed: the marriage of Adrianna and Antipholus of Ephesus is marked by infidelity and deceit; the relationship between master and slave, brought up together from birth, is characterised by abuse and violence; a father is grief-stricken because of his separation from his sons, and yet is to punished for seeking to find them.

The loss of sense of self is summed up in Antipholos of Ephesus’ question to his wife, “Wherefore dost thou mad me?”. The word ‘mad’ is spoken by many characters throughout the play, indicating uncertainty and unhappiness.

Music, a cappella and non linguistic, pervades and punctuates the whole. Marking key moments, introducing and ending scenes, the musicians are very much part of the performance.

Of all of the theatrical elements which made up this production, it is hard to single out one above another – along with the cast, the creative team all deserve acknowledgement. All in all, it was a wonderful way to spend a summer’s evening.

Directed by Phillip Breen, Comedy of Errors is at Stratford until 26 September, and then on national tour. For further information visit rsc.org.uk

One thought on “Review: The Comedy of Errors”