Dave Woodhall talks to legend of the ring Peter Buckley.

Peter Buckley is one of the great unsung heroes of boxing. Famous for having 300 professional bouts, he was a Midland area champion at two weights, and although he rarely won on the cards, in boxing there’s often a big difference between winning and getting the decision. Peter recently published his autobiography, King of the Journeymen, written with Chris Aker, which tells of a career in which he gained the respect of everyone in the fight game.

It’s thirteen years since you retired. What took you so long to get it all into print?

“I had a few people getting in touch. Mark Turley, who wrote a book called Journeymen, he wanted to do a chapter about me but I thought I was more than a chapter. Then somebody om Facebook put me in touch with Chris Aker. We had a chat and we started meeting up and recording, then lockdown happened so we were doing it over the phone or by text, Every time I remembered something I’d send him a text. Pitch Publishing got involved and the next thing I had a book out.”

I didn’t realise until last week that you were a Villa supporter, so growing up in Acocks Green you’d have to either be a boxer or a runner. 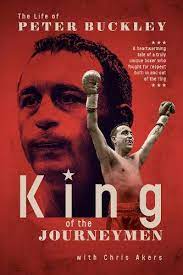 “I was a bit of both. My brother was the big Villa fan, I used to go down when I was younger but I don’t bother much now.”

“You could add another hundred on. I lost that many by half a point. I was always in the away corner, you’d have the other fighter’s fans there and every time he threw a punch that missed they’d cheer and the referees would get swayed by that. There was one fight up in Stoke against Gary Marsden, I absolutely battered him and got the draw. The other day he said to me on Facebook ‘I just read your book and you’re right. You did win that fight.’ I thought fair play to him.”

That’s an aspect of boxing that outsiders don’t always realise – you’re often better off losing. Anyone who might try to criticise your record should bear that in mind and remember you had the ability to have 300 fights in the first place.

“They’re not boxing people, though. I went to London and I stopped an unbeaten fighter, Matt Brown, in a round. I don’t think the phone rang for about six weeks after that.

“Before my last fight I had my medical stuff, my brain scans came back. I never had a change in my brain scans in all the nineteen years I was boxing, and that says something. Acelino Freitas said in Ring magazine that I was the best defensive boxer he ever fought and to meet that was a great achievement because he was a superstar.”

You’re reckoned to have fought seventy champions and twenty of your fights were against future or past world champions. You’ve said your toughest opponent was Duke McKenzie but who were the biggest surprises? Which fighter did better than you thought he would?

“To be honest, when I fought Naseem Hamed the first time, that was an easy one. Obviously he beat me but I didn’t think he would go on to do what he did. To me he was the best featherweight in the world, won all the belts, but when I first boxed him I’d seen him on the circuit when he was an amateur and he was a cheeky little lad.

“I liked him, but I knew what he got up to when he turned pro. I sat outside the ring with my back turned to him when he came in dancing. He looked over and I was there looking away so he just got into the ring, then I followed him in. I wasn’t in awe of him and I jumped at the rematch because he never hurt me. If you watch it on YouTube he beat me, yes, but he didn’t put me down, he didn’t hurt me and it was a bullshit stoppage. I was suspended for 28 days and it cost me about three more fights. I was surprised when he went on to be a world champion.”

Equally there must have been someone you thought was a bit special but never made it.

“There was a fighter from Manchester. Craig Dermody. He was really, really good. I boxed him the first time, he only beat me by half a point then a month later I fought him again and he’s really improved. His trainer Brian Hughes asked me and I said how much he’d come on. Then a bit later he fought Karl Taylor, who was from our gym, and the ref was a bit green, he give Karl the win and the kid never boxed again. I think he could have gone on to become a world champion. He had every move in the book.”

You had plenty of last minute calls to help out a promoter but what was the shortest notice you ever had?

“I’ve come home from training, and Nobby Nobbs my trainer rang me up and said could I get over to Dudley for seven? I told him I was eating my dinner and he said ‘The kid’s heaver than you anyway’ so I was over to Dudley, weighed in and I lost on points, not a problem. I’ve known Nobby sound the horn outside, I’ve jumped in the car and gone off to London or wherever.”

Nobby should have an MBE. People talk about how boxing can damage your health, and it can, but the amount of lives he must have saved by taking kids off the streets.

“Definitely he saved my life. I was heading nowhere, it’s a cliche but boxing really did save me.”

Did you ever think about training yourself when you retired?

“I did something with the amateurs for a bit and I had a pro licence, working with Errol Johnson, then my mum was ill. I was looking after her, then she passed away and I never got back into it. I’ve got four grandsons now and with going to work they take up a lot of time. I don’t want to be coming home then going down the gym. It’s a hard life being a trainer. You have to be 100% dedicated but I don’t have that dedication.”

Would you encourage your grandchildren to box?

“The oldest does taekwondo. I do take him on the pads and he looks alright, then there’s twins and they’re always fighting each other. If they want to box I’d be behind them but I wouldn’t want to get involved; I’d leave that to the trainers. Just because I was a boxer doesn’t mean my way was the right way.”

King of the Journeymen, by Peter Buckley and Chris Aker, is out now.