Birmingham International Dance Festival is back, it’s live and outdoors and in venues. The city’s signature festival, produced by Birmingham-based DanceXchange, runs from 21st September until 3rd October. Following a hugely successful Online festival in June, this autumn edition offers an imaginative and entertaining live programme, shining a light on the region’s amazing dance offer, engaging communities and celebrating diversity and inclusivity. 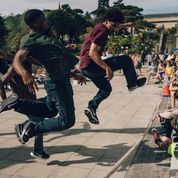 Taking place in locations across Birmingham including, Centenary Square, Digbeth, North Birmingham and in Midlands Arts Centre and Cannon Hill Park, the full programme – to be announced shortly – will invite audiences back into public places and spaces to enjoy amazing performances as well as welcoming audiences back into the city’s venues.

Lucie Mirkova, Head of Artistic Programmes at DanceXchange and Curator at BIDF says: “We can’t wait to be back outdoors featuring thrilling dance performances and to return to venues, finally, after so long. The programme is really exciting showcasing the amazing creativity of both UK and International artists. We are delighted to be taking the festival to communities across the city where you can experience amazing dance on your doorstep. Make sure you’ve got the dates in your diary and look out for more announcements in the coming weeks.”

Highlights include:
• Two new Hip Hop commissions as part of Roaming Dance, a partnership with Punch through Gallery37 North. Working with young people from North West Birmingham, Just US Dance Theatre with choreographer Joseph Toonga’s present Born to Protest and Emma Houston and World Champion beatboxer and musician Bellatrix present new work Like Mercury.
• Beyond Borders: We Have A Choice, a joyful, live dance sequel to the film Beyond Borders which was created earlier this year with over 130 young dancers in the West Midlands.
• A creative dance workshop programme in schools plus public free dance classes featuring styles from Hip Hop and circus to flamenco.
• The World Premiere of operatic dance-drama Mariposa by DeNada Dance Theatre at The Patrick Studio, a Queer tragedy inspired by Puccini’s Madame Butterfly.
• Loop, a fascinating exhibition and performance at Eastside Projects.

The full programme will be announced in the coming weeks. You can find out more at bidf.co.uk