Dave Woodhall looks back at Euro 96 and how international football discovered Birmingham.

England’s success in the European Championships has brought back memories of the last time the final stages of a major tournament was held here, 25 years ago.

Then, as now, the qualifying home nations began the tournament more in hope than expectation. Unlike now, though, the mood of the country as a whole was a bit less positive in the weeks running up to the big kick-off.

The image of English football had moved on from the pariah sport days of the eighties; Italia 90 and the Premier League had started the improvement but there were still fears of hooliganism, both from home supporters and visitors from the continent.

Villa Park was scheduled to host games in England’s group, with Scotland, Switzerland and the Netherlands playing in Birmingham. Plans for accommodating their supporters began months in advance, begun by a council committee headed by Villa season ticket-holder Cllr Brenda Newton and including Blues supporter Steve Beauchampe, the Football Supporters Association’s international officer, and Albion fan Dawn Clennett, who was in charge of the FSA’s Fan Embassy based in Corporation Street.

The focal point of the organisation was a fan camp based at Moor Lane playing fields in Perry Barr, which became the source of controversy due in no small measure to sensationalist stories originating in the Evening Mail, stoking fears of 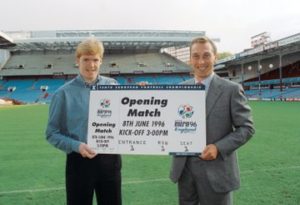 violence. This led to a heated meeting of local residents where amongst other concerns one local publican demanded assurances that supporters leaving the camp on their way to matches would not be allowed past his pub. For their part the council committee did their utmost to reassure locals (and it was telling that the Aston Residents Association, used to football supporters on their doorstep, were far more reasonable) that there would be adequate security to protect all parties.

The locals were still wary on the day the camp opened and it was with trepidation that all concerned awaited the first arrivals – who turned out to be a well to do Swiss couple in a very expensive camper van. “You could see the relief on our faces,” Cllr Newtown said. “We gave them tickets to the theatre, to the art gallery and anything else they wanted”.

And that set the scene for what was to become a week-long carnival in the city. The Square Peg had said they wouldn’t serve football supporters – a rule that was scrapped seconds after their doors opened and they were filled with Scottish and Dutch fans. The Holte Hotel reportedly had the busiest day in the history of Wolverhampton & Dudley Breweries and the man who had wanted nobody anywhere near his pub put out welcome signs and ran drinks promotions for the campers, who marched to Villa Park behind a piper hastily found after an appeal on Radio WM. Meanwhile, the city centre was crowded with supporters of both teams plus office workers and shoppers who were at first wary but soon got caught up in the joyful atmosphere.

The scenes in Birmingham were repeated elsewhere, as the nation got behind their team as it advanced towards the semi-finals. The camp site at Moor Lane was regarded by users as the best-organised they’d stayed in, and they continued to party with the residents and police, particularly the ones who dropped by to keep an eye on proceedings and ended up playing a game of football that lasted all day, with regular substitutions on both sides. The only problem had been a bout of vandalism when bricks were thrown into the site after a couple of days and by

some amazing coincidence one of the damaged tents belonged to the Mail reporter who had written most of the sensationalist stores before the tournament and who had installed himself in the camp unbeknown to its organisers.

The last group game at Villa Park saw Scotland beat Switzerland, only to be eliminated on goal difference as England scored a sensational 4-1 win over the Dutch. The ground was also due to host a quarter-final, which could have involved Denmark (the best-supported visitors), Italy or Germany, so it was a bit of an anti-climax when Portugal played the Czech Republic. Neither side had brought many fans so the camp site and the Fan Embassy, where volunteers had been working around the clock, wound down over the weekend that saw England beat Spain (I bought a car that afternoon. There’s never been such a good time to strike a bargain; the dealer reckoned I was the first customer they’d seen for three days) and the Sex Pistols playing at Finsbury Park. They were introduced by Stuart Pearce and Gareth Southgate; for one of them it was probably a highlight of his life, the other very likely denies all knowledge.

England went out to Germany on penalties in the semi-final, which was becoming a habit, but football, if you’ll excuse the cliche, was the real winner. Fears of violence had been unfounded, everything had been positive, everyone had enjoyed themselves and advertising executives around the world had begun to take notice of the commercial potential of the game. No longer was football the awkward relative, it was now embraced by the entire family.

Football had come home. Maybe this time round the trophy will stay here as well.