New graffiti murals put Shakespeare in the heart of Sparkbrook and Balsall Heath.

Artist and Curator Mohammed Ali of Soul City Arts has created two new graffiti murals in the heart of Sparkbrook and Balsall Heath as part of the Everything to Everybody project.

Created through a five-week project with pupils from Montgomery Primary Academy, Sparkbrook and Percy Shurmer Academy, Balsall Heath, with a permanent mural appearing at each school, the project has encouraged these young people to ‘Tell Your OWN Story,’ remaking Birmingham’s uniquely democratic Shakespeare heritage in the process and exploring video, poetry, manga and mural painting in a series of dynamic workshops.

The new murals tell the stories of the vibrant and diverse, communities of Sparkbrook and Balsall Heath featuring their unique narratives and local industrial history and allowing them to claim “a place in the story” (Antony & Cleopatra) of Birmingham’s pioneering Shakespeare heritage. 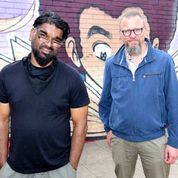 Mohammed Ali (pictured left), Artist and Curator and founder of Soul City Arts said: “We are aiming to empower children to boldly express themselves and their stories in an increasingly polarised society. Let’s face it, our society isn’t one where ‘everything is for everybody’ and we need to make a head start with young children to confront the inequality we see around us today.”

Mohammed attended Montgomery Primary Academy himself. He went back to school with Everything to Everybody to explore questions around exclusion and inequality as well as to raise awareness of Birmingham’s unique Shakespeare heritage and open it for all, including the children at these schools.

Professor Ewan Fernie, Everything to Everybody Project Director said: “The collaboration with Mohammed and his team of artists has been a fantastic way to open up Birmingham’s Shakespeare collection with and for its young people. It was of the utmost importance to the founders of the world’s first great Shakespeare library in the city that Shakespeare’s plays include all sorts of people from kings and queens to clowns and gravediggers. Mohammed and Soul City Arts have taken that as a spur to imagine a truly inclusive city and it’s been amazing and instructive to see the children expressing and contributing their own stories, memories and experiences.

“The finished murals will leave a lasting legacy in Sparkbrook and Balsall Heath, bring Shakespeare back to life for contemporary Birmingham now.”

The Everything to Everybody Project is an ambitious celebration of one of the UK’s most important cultural assets: the – not just the first great Shakespeare library in the world but also the only great Shakespeare collection which belongs to all the people of a city.

A collaboration between the University of Birmingham and Birmingham City Council, with funding contributed by National Lottery Heritage Fund and History West Midlands Everything to Everybody will give this uniquely democratic Shakespeare heritage back to people and communities across Birmingham.

To achieve this, Everything to Everybody is working in conjunction with anchor institutions and grassroots organisations across Birmingham, supporting, inspiring and championing many brilliant projects such as Soul City Art’s Tell Your OWN Story.

Find out more about this project and others via everythingtoeverybody.bham.ac.uk.