A woman who allegedly hurled racist abuse and spat at a doorman on Birmingham’s Broad Street faces a lifetime ban from all the city centre’s venues.

The abusive customer, who was also said to have damaged the glass front door of The Figure of Eight pub during the incident on Saturday night, is now under investigation by West Midlands Police.

Video footage of the racist abuse, believed to have been filmed by another customer, has gone viral on social media with more than two million views by Monday morning. The woman, who had reportedly been rejected from the venue, appears to be trying to get back in to speak to a friend, but she was stopped by the security man.

The brief footage captures the woman violently shoving the open doors towards him, before verbally abusing him with offensive racial comments and then spitting at him as she walks away.

Chief Inspector James Spencer, of West Midlands Police, said: “We’re aware of a video showing a woman directing racist abuse at a member of door staff in Broad Street over the weekend. 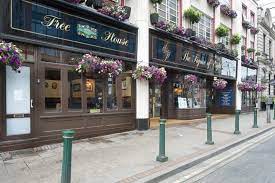 “It’s an awful incident and people are understandably disgusted. It’s a racially aggravated harassment offence and we prioritising the investigation.

“Officers have been working hard with local businesses to make the city a safe and enjoyable place to visit. Racist behaviour is completely unacceptable.”

JD Wetherspoon, which runs the pub, has already said the woman would be banned from its city centre premises.

Regional manager Heath Curley said: “The woman had been in the pub, but we didn’t like her behaviour so she was asked to leave.

“As she was being escorted outside she knocked over furniture, including chairs. Once outside, the doorman closed the door but the woman began kicking the door and cracked the glass.

“She then subjected him to racial abuse as can be seen on the video.”

Mr Curley praised the actions of the doorman, who is employed by an outside agency and works regularly on Broad Street.

He said: “All credit to the doorman, who acted very calmly. He’s a very nice fellow and this was certainly something he shouldn’t be exposed to.

“We have a zero tolerance policy when it comes to racist abuse against any of our staff and are treating this incident very, very seriously.

“This behaviour is completely unacceptable and this woman will not be welcome in any Wetherspoon’s pubs in the city centre again.”

The abused doorman, whose identity has not been revealed, reportedly placed this comment about the incident on social media: “I’ve seen and been through pretty much anything there is to see and go through whilst doing the job. This, however, is something I, or anyone who looks like me, shouldn’t have to go through.”

Mike Olley, general manager of Westside BID, said: “This shocking behaviour has been reported to the police and will land this young lady in a lot of hot water with the authorities.

“As well as Wetherspoon’s ban, we will also be seeking for her to be banned for life from all city centre venues. We will be reporting the incident to all other city centre BIDs and to the city’s Pub Watch group, as we simply do not want and will not tolerate someone who exhibits this abhorrent sort of behaviour.”

Mr Olley added: “While incidents like this are rare, what I would like to highlight is the exceptional calm shown by the doorman concerned who, despite being racially abused and spat at, kept his head and did not react.”

West Midlands police said they arrested a 24-year-old woman from Worcester on Monday.