Will Mapplebeck points the way to his Number One choice for best documentary. 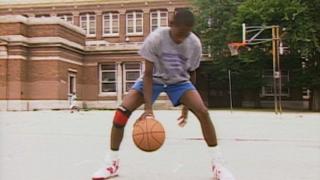 1994’s Hoop Dreams is the best sports documentary ever made. It is not the most smoothly produced, or the most revolutionary in terms of content or story-telling, but it is still the best. It took five years to make and the end product is remarkable.

The story of two black talented teenaged athletes Arthur Agee and William Gates, it follows their lives and the lives of their families as they attempt to realise a dream to become pro basketball players during the late 1980s and early 1990s.

It features not only Arthur and William’s stories, but recounts the lives of family members – Arthur’s mum who works so hard to qualify as a nurse, the brother who once dreamed of NBA stardom (and lives out those dreams through William) and 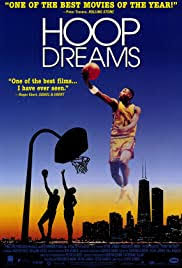 Arthur’s drug-dealing dad who finds Jesus after time in jail.

You see, Hoop Dreams isn’t really a documentary about basketball, it’s about life, and people’s struggles, their triumphs and their failures. Following Black Lives Matter, it is worth a watch as a reminder of the systemic unfairness that holds so many black people back, trapping them in poverty, and wasting so much untapped talent.

Hoop Dreams doesn’t preach, but it is all the more powerful for that. Arthur is recruited to a school in leafy Westchester, a three hour commute from his home in the Chicago projects, but he doesn’t fit in and is then left with a $1,800 tuition debt for his parents to repay. If the debt is not settled then Arthur’s test results are not released, hindering his progress still further.

Arthur’s parents visit the school to discuss re-paying the debt and leave almost pathetically grateful, allowed to pay back the sum in searingly high monthly amounts so the results can be released. Arthur’s dad even hugs the school accountant as they leave. The system has won again.

Neither Arthur nor William realise their NBA dream but as the post-documentary credits reveal, they have gone on to have successful, seemingly happy lives away from the violence and dysfunction of the Chicago projects. I felt glad for this, but I wondered how many of their friends or family were either dead or in jail. This is a story of survival against the odds.

As I watched it, I kept thinking about what life is like in those projects now. I’d like to think it might be better, that there has been substantial investment, that life chances for young blacks are better so they don’t have to rely on almost impossible dreams of basketball stardom. But I doubt it.

Hoop Dreams isn’t just the best sports documentary of all time, it’s one of the best documentaries ever made. Catch it on iplayer if you can.

One thought on “Hoop Dreams and a sliver of hope”