Brave street warden Enoch White has received a top police award after his swift action led to the arrest of an armed gunman in Birmingham.

The drama came when Enoch was enjoying a pizza he’d just bought for his late-night break on Broad Street, in the Westside area of the city centre. 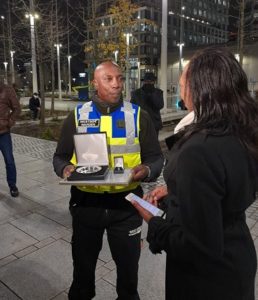 A car suddenly pulled up and the driver pointed a gun at him through the open window, demanding that he hand over his pizza. Enoch calmly refused, and when the car sped away he took the registration and flagged down a passing police car, which resulted in the eventual arrest of the suspect.

His bravery during the incident back in August 2019 has now resulted in an official Chief Constable’s Commendation award from West Midlands Police.

Dave Thompson, chief constable of West Midlands Police, said: “By reacting the way you did you undoubtedly prevented a far more serious crime from occurring.

“As a result of your brave actions the incident ended without any harm or injury to any member of the public, but most importantly the apprehension of a dangerous armed criminal.”

Enoch, aged 63, speaking after receiving his award, said: “I feel very privileged to receive such a fantastic award. It’s an honour to be a part of the team that looks after all the Westside business and visitors to Broad Street.”

Mike Olley, general manager of Westside BID, added: “This just demonstrates the calibre of people we have working as wardens. And it also says a lot about the quality of food available on Broad Street – this was obviously a pizza worth dying for!”

West Midlands Police said the suspected gunman has since been charged and is currently remanded in custody for several serious offences.