Ward End vampire legend represented in Italy in the artwork of Laura Lorenzini.

The legend of the Birmingham vampire inspires the italian artist Laura Lorenzini (Nadine), who interprets it in a very fascinating charcoal on paper.

The artwork, entitled The Magic of the Moon or the Legend of the Birmingham Vampire freely interprets this interesting story from the Midlands. 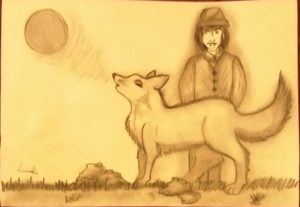 It depicts the figure of a man who manifests himself as a vampire along a path in a Ward End park on the full moon night, while a wolf howls at the moon with his eyes closed and an ecstatic expression. As if it were a prayer to an ancient deity.

Suddenly the man bursts onto the scene and attacks the wolf to satiate his hunger momentarily, before continuing his journey in search of humans to feed on.

The man, or rather now a vampire, with scruffy appearance, is depicted very simply dressed and with a hat that allows him to hide on a full moon night. The moonlight – finally – brings an intense and penetrating energy that pervades the entire artwork.

“I have been fascinated by the vampire myth. I had loved to transform it into an image and interpret it freely according to my feelings at the moment of artistic creation”, Laura Lorenzini said.

“I have learned about this myth from local English chronicles and the stories of my husband who lived for some time in Oldbury and Smethwick,” she added. “Inspiration guides my hand. The pictorial instinct speaks on paper better than I can with words. That’s how my artworks see the light, whether they are paintings or charcoal drawings.”