With live music currently caught between the pincers of a global pandemic and an economic recession, the outlook for independent promoters and venues has never been worse. But one festival in Birmingham decided to take a stand rather than simply accept its fate. 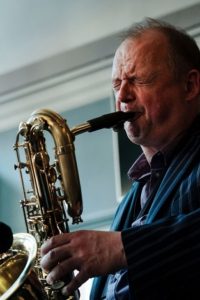 That’s why, from the 16th-25th October, the Birmingham, Sandwell & Westside Jazz Festival is going ahead with a special Covid-safe edition. Normally staged during July, for the 36th consecutive year the festival is bringing its nearly entirely free programme of live jazz and blues to the bars, squares, shopping centres and libraries of Birmingham and Sandwell.

With 34 events it won’t be the usual jazz and blues extravaganza our audiences have grown accustomed to but there will some of UK’s finest musicians alongside our local talent – and even the bawdy, good time blues of The Jim Dandies from Bassano del Grappa, in Italy.

All venues, musicians and festival staff will be strictly adhering to government Covid-19 guidance and singers, brass and wind players will have a PVC screen between them and the audience, for the first time ever audience members will be discouraged from dancing, and social distancing and mask wearing will be mandatory throughout.

Festival Director Jim Simpson said “This is the third time this year we have constructed the festival. The July event, with more than 200 programmes planned, was floored by the virus. We then delivered a ten day Virtual Festival over the dates originally planned for the annual event, and here we are with what promises to be a most welcome celebration of some great music.

We’ve encountered a bunch of delays and diversions but we’ve relished the challenge of keeping music live in these most unusual circumstances. It’s what we do!”

The full festival programme has now been released online at www.birminghamjazzfestival.com.