Call for Birmingham city council to commit to action on climate change.

Climate activists from Extinction Rebellion will be demonstrating outside the council building in Victoria Square this afternoon, demanding that councillors honour their commitment to achieving carbon neutrality by 2030.

Last year, Birmingham City Council announced a ‘Climate Emergency’, but now councillors are seeking to abandon their 2030 net-zero carbon emissions target. In protest, demonstrators will offer a visual representation of the devastation that 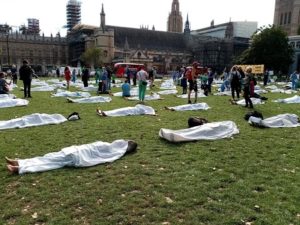 climate change will bring, grabbing the attention of passers by. As such, it will consist of ‘corpses’ lying beneath white sheets, each with a death certificate expressing the imminent dangers associated with the climate crisis such as flooding, further pandemics and famines.

Protestors intend to place a spotlight on the council, warning that lives will depend on meaningful action from them to mitigate climate change. With ‘Route To Zero’ plans still undergoing consultation, councillors are being encouraged to keep the promise they made last year when they declared the climate emergency.

Recent University of Birmingham graduate, Charlie Avery said: “If Birmingham, one of Britain’s biggest and most important cities abandons its target, it will set a dangerous precedent for others to follow, jeopardising the country’s chances of fulfilling our Paris Agreement goals. Equally, it can become a trailblazer in green urban development.”

Birmingham resident and mother of two, Becky, said of the council’s plans: “Birmingham is already one of the most polluted cities in the country. As a mom I feel worried about what all this pollution is doing to my kid’s health. It makes me so angry that the council isn’t sticking to their climate promise.”