Interview any musician and it’s difficult to come up with a question they haven’t been asked many times before. It’s even worse now, so may as well start with the most unoriginal one of the lot. What are you doing to keep busy in these days of lockdown?

“Trying to live as normal a life as possible. I’m lucky, I like where I live, I’ve got a garden and a studio so I’m just getting on with writing, in several different genres actually. I’m not telling you what they are but at the beginning I saw this was going to happen so I thought right, I’m going to do that, that and that. One for the money, two for the heart, three to get ready.”

That’s songs you’re writing is it?

“Well, yes and no. Songs would be for Go West or for myself but I am writing lots of stuff for films and TV. It’s been hard for musicians over the last few years because you can’t make much out of writing and now the live side’s been taken away as well. I’m lucky, I can tick over for a little while but I know a lot of people who’ve got their head in their hands and just don’t know what to do.”

From the outside we might think it’s just a case of audiences not being allowed into venues, but the situation is affecting everything in the business. You can’t rehearse or travel, studios are closed and it must be very difficult trying to know what to do for the best. A good anlaogy would be a boxer having to get ready for a fight but not knowing when or if it will take place.

“You’ve put it perfectly. Your voice is a muscle and I’ve noticed it with my own body because I used to play football and I’m not doing that now. If you don’t do anything with your body it just goes and the same happens with your voice. If you don’t sing you can’t just get up and do your job. I’ve known Pete since I was sixteen; he’ll do his vocal exercises every day, he’ll be looking after himself because you don’t know when we might be called on to do something.”

I would guess that you would normally get ready with the intention of being on top form for the start of a tour, but right now you don’t know when that’s going to be.

“As things stand it will be next May. I don’t want to cast doubt over it. These gigs were supposed to be last May so now it’s May next year, if everyone says it’s still good for then.”

There’s a lot of obvious talk about how some venues will struggle but it’s not just about them. Even people like caterers who base their business around doing summer festivals might not be able to survive.

“Promoters especially are in real trouble. It’s hard enough having to build your hopes around an open air show in Britain without all this. Everyone thinks promoting is easy money but this has been very difficult for them. They still have to pay their bills, the halls still have to be paid if you cancel. And we’ve got tour managers, roadies, lighting guys, they’re all on their backsides. We do as much as we can but we’re not earning anything and there is no happy ending at the moment. Hopefully there will be one but it’s like, what’s next? We’ve got dates booked for the whole of next year and beyond, and we hope it all goes on.”

What’s next is the tour in May, and in particular the date at Symphony Hall.

“We’ve played it a couple of times. It’s a great gig, Birmingham and the surrounding area are the best places for us. I’m not just saying that, it always has been. We played the last night of Birmingham Odeon when that closed, but I don’t think it was because we were so bad.” 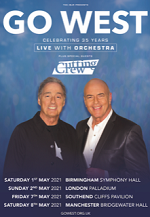 This is your first tour with an orchestra.

“There’s a lot to learn. We’re halfway through an orchestral album so we’ve got some experience of it. It’s certainly different – we had a bit of time at the end of one session and I could tell something was wrong because you have to tell the orchestra how to play correctly, you can’t exactly get them to stop halfway through.”

You have Cutting Crew on this tour.

“They’re good lads. We’ve known them forever and toured with them. They’re not on just because they’re mates, they do a good show as well. They can still deliver, as they say.”

Then you’re touring with Paul Young in September 2021.

“That was going to be happening this September but it got called off pretty early. You might think it’s our choice not to tour but it’s down to the promoters.”

I know it’s bad of me but I’ve got this vision of a car park full of XR3s and Sierras outside the venues.

“Now now, you know that’s not true, and the audience don’t all have mullets either.”

But things were better then.

“Were they? Well, better than now I suppose. I’m not big on looking back, I’m looking forward. If you’re positive you could say how interesting these times are. Let’s get it sorted and let’s move on. Get a vaccine; I’m not going to say what should happen, that’s what other people have done. I’m whatever the opposite of whatever a conspiracy theorist might be. I’ve got mates who I’ve seen carrying the David Icke book but once somebody tells me the queen is a lizard I’m like, put that bottle down…”

And when 2021 kicks off it’s down to you and Pete and a few others to make us all happy again. No pressure.