I’m not sure about Blues’ latest signing Scott Hogan, who to use an old timer’s saying came in like a lion and out like a lamb during his loan spell last season. He was a good foil for Lukas Jutkiewicz during that time, but my worry is that 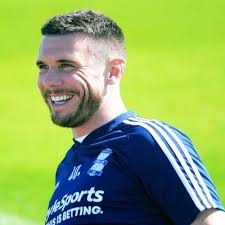 unless we can get Jonathan Leko up to speed quickly then we will lack any real power up front if the Juke gets injured.

I’m presuming that Aitor Karanka sees Hogan as an option to mix things up and occasionally switch to 4-4-2 rather than him playing up front on his own, where hulking central defenders will be licking their lips at the prospect of winning every header in the air and cleaning out our new signing on the ground.

This means that given our manager’s penchant for 4-2-3-1, Hogan won’t be starting week in week out?

Having said all that, it’s a decent signing for a player who has plenty of goals in him at championship level. Apparently it was an undisclosed fee, which usually means its either almost a giveaway or over-priced. Let’s hope it’s the former.