HSBC bank is said to be one of the worst companies in the world when it comes to investing in fossil fuel industries, with 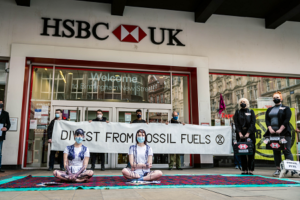 current investments of over £67 billion.

The activists undertook this action to highlight HSBC’s dirty investments to the public and pressure the bank to stop funding the Oil, Coal and Gas industries that are destroying the planet. Instead, they demand HSBC fund the future by investing in clean energy and green jobs.

Youth climate activist Cat Savage will be part of the performing group. She said: “HSBC knows we are facing a climate and ecological emergency, and their insistence on funding polluting fossil fuels leaves their hands dirty. They get rich while they rob me of my future.”

Despite receiving praise for its new energy policy, HSBC left a loophole allowing the bank to finance new coal-powered plants in three countries – Bangladesh, Vietnam and Indonesia – until 2023.HSBC’s own shareholders have written to the bank’s CEO, John Flint, urging him to close this loophole and fund systems based upon renewable energy instead.

HSBC customer James Warren said: “I’ve banked with HSBC for years and I was shocked and disgusted to learn that this is where they’re putting my money. You don’t expect your bank to be giving money to companies that cause so much damage to the planet. If this does not change I shall be taking my money elsewhere.”