Located on Hurst Street, the multi-coloured walkway is made up of eleven vibrant colours, in recognition of the LGBTQ+ community. It was created by artists James Gavina Cowper, and Matthew Stephens (pictured left). 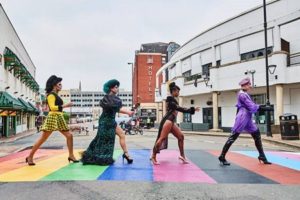 Southside BID manager, Julia Robinson, said: “Southside District is famous for our incredible Gay Village and we’ve been planning our rainbow crossing for some time. Originally it was going to be unveiled as part of Birmingham’s annual Pride Festival, but as the event was cancelled, we wanted to push ahead with it this summer so that people can cross with pride in Southside.

“Each of the colours represents a different part of the LGBTQ+ community, demonstrating our solidarity with everyone who comes to enjoy themselves in our fabulous and inclusive district.”

The unveiling of the new rainbow crossing coincides with the temporary pedestrianisation of Hurst Street in Birmingham’s Gay Village at the heart of Southside, starting today for six consecutive weekends, to allow restaurants and bars to make use of new licensing rules for outdoor seating, which is expected to give a vital boost to the District’s hospitality sector.