Online or in person, pay your tribute to war heroes.

2020 marks the eightieth anniversary of the Battle of Britain, widely recognised as the country’s finest hour. The Royal Air Force Museum is inviting the country to remember this significant story of bravery, international alliances and ingenuity both at the Museum and online.

The RAF Museum is free to enter and has sites at both London and the West Midlands. With wide open spaces both inside and out, the Museum is a great and safe day out for all the family and will be commemorating Battle of Britain 80 with a series of special events and exhibitions.

Home to the world’s oldest Spitfire, the RAF Cosford Museum houses a collection of both British and German aircraft from the Battle of Britain era. The Spitfire forms the centerpiece of the new display, where the RAF’s frontline fighters, the Spitfire, Hurricane, Gladiator and Defiant are face to face with their German rivals the Me 109 and Ju88, to tell a coherent story. 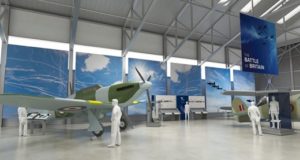 Previously unseen objects from the museum’s collection including a Rhino suit worn by Defiant pilots, Dowding’s jacket, artefacts from the plotting rooms and medal bars, will share the stories of the people who helped win the Battle, in the air and on the ground. A highlight of the new display is James Nicolson’s flying jacket and medal bar containing his VC medal, the only VC awarded during the Battle. Nicolson also flew the Spitfire on display at Cosford.

To ensure that everyone across the country is able to commemorate this historic occasion, the museum has a number of online events.

They will be livestreaming a talk with Jim Nicolson’s nephew; and a talk from the Air Historical Board. An exclusive podcast has also created in conjunction with The National Archive and the RAF, which looks at a range of untold and unheard stories from the Battle of Britain.

The Museum is also commemorating the Battle of Britain virtually this year with the Spitfire 10K and Spitfire Family Run. Complete 10K any time between the 29th August and 15th September, wherever and however you choose – running, cycling, rowing, or even walking the dog. Participants will then be rewarded with one of the highly sought after 2020 Spitfire 10K medals! Find out more and register online at rafmuseum.org.

Additionally, the London branh of the museum is home to the most complete set of Battle of Britain aircraft in the world including the ‘fighter four’: Spitfire, Hurricane, Messerschmitt 109 and Fiat CR42. This year they will be supported by new displays telling the wider Battle of Britain story, including an enigma machine, Dowding and Goering’s busts and medals, and Newall’s uniform. A new interactive will explain in an engaging way how the Dowding System worked, challenging the visitors to help detect the raids that happened on the 15th August 1940.

Complimenting the new display will be stunning year-long art exhibition: In Air and Fire: War Artists, the Battle of Britain and the Blitz. The exhibition will present over 50 works of art created in response to the war in the air by acclaimed artists such as Nash, Kennington, Laura Knight, Graham Sutherland, Nessler, Nevinson and Olga Lehmann. Many of these works have never been shown to the public.

You can also support the museum by adopting a Battle of Britain artifact. Several objects are up for adoption including RAF flying ace Group Captain Sir Douglas Bader’s logbook, plus a selection of objects from the new displays including a Sector Room Clock and Aircraft Recognition Cards. Details on how to Adopt an Artefact and to browse the items available, visit here.

For more information on Battle of Britain 80 anniversary activities at the RAF Museum visit rafmuseum.org.

The museum is now open daily with a range of measures in place to ensure a safe and great day out for the whole family. While still offering free entry to all, visitors are asked to pre-book their arrival time online at rafmuseum.org.