Richard Nevin has a stroll through the city centre.

It’s quiet along the cut, quite possibly quieter than it’s been on a Saturday afternoon for a generation, let alone a sunny and warm Easter Saturday. The silence is rather eerie, the usual hum of the infrastructure is nowhere to be heard, the gigantic chillers and air conditioning units would be working away on their first real outing of the season, the hubbub of people and traffic adding to the general sound of a city at work and play.

The ducks quack pleasantly, enjoying the unfettered access to the water as the long boats rest gently in the basin, brightly coloured but devoid of life. The water is still dank and foreboding, it’ll take more than a month long lockdown for nature to truly return to these canals.

My only companions appear to be walkers and joggers, replicating my singular piece of excercise a day. We are distancing as required, issuing nods and pleasantries that hide worry and anxiety. A young girl pauses her exercise to make a phone call, the profanity clashing with her gentle Irish accent as she regales a sad tale of poor health to the person on the other end, there are more f’s than an episode of Mrs Brown Boys but if it gets the message across…. 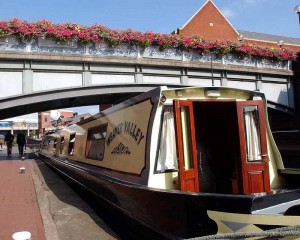 The chimes of the Brindley Place clock pierce the calm, they seem louder than usual as they clang to mark time, something we seem to have an abundance of all of a sudden.

At the low Broad Street tunnel the invisible traffic light of social distancing is obeyed as we take it in turns to stoop in the darkness but there’s always one and a careless jogger almost forces me over the railing as he rushes past, panting and sweating. The International Convention Centre complies with convention sitting in its own darkness and the arena beyond follows suit.

Up on Brindley Place the memories of a thousand drunken nights come rushing back, when we were amorous in Aramis, without a care in the world. Every bar and restaurant displays a notice of closure, complete with optimistic sign off of better days to come. A single tone alarm sounds in one dark outlet, it’s ignored and I note that the next time the doors are opened to this particular establishment the keys will be in the hands of the official receiver.

To my disappointment the Black Sabbath bench is hoarded off, you can have a selfie with Bill or Geezer, their images placed by way of an apology. The guilty party is the Midland Metro Alliance, their prehistoric machinery at rest on the Golden Mile, the painfully slow progress of a further tram extension now extended by the shutdown.

I exchange pleasantries with an elderly gentleman as we pass the Crown, now in fancy dress as Reflex but as black inside as the water of the canal. I get my first glimpse of the revamped Centenary Square which appears much bigger than when I crossed it on a regular basis twenty years ago. Symphony Hall has an ugly wound at the front as works continue on the revamped entrance, pictures of Toyah Wilcox and Martin Kemp, smiling in hard hats tell us it will be impressive once finished.

The delightful sound of water heralds the presence of something that has been missing in the City for a good while although the new fountains rise only a couple of feet, as if not to overdo their one opportunity for exercise. A lone sunbather sits on the concrete outside the library, bottle of Piz Buin by his side, he has skin as pale as my own, and he could sit there ’till next Easter and still be alabaster white. The countdown clock ticks away for the forthcoming Commonwealth games but no-one takes any notice, because there is no one around to do so.

The corporate monoliths of the new Chamberlain Square are next in view, sweetened by a skirt of hospitality outlets, yet to be occupied. The Museum and Art Gallery stands steadfast as ever over the Square, waiting for the opportunity to open up and delight the visitors once more. Victoria Square in the sunshine takes me back to last year’s Jamaican Festival, unlikely to take place this year and just like everyone else who has seen their summer plans dashed, I comfort myself with the thought that there is always next year, always 2021.

An Irish flag hangs limply from a building on the corner, I’ve never noticed this before, perhaps it was left over from March 17th as everyone left the city and the trivialities were left to one side. Colmore Row is busier, public transport sees to that, the number 9 ambles past, it’s only occupant has his hands on the steering wheel, a key worker now in fashion until the clapping fades away and the ghouls and economists decide that they aren’t so valuable after all.

St Phillips Cathedral continues its role as father of the city, keeping watch on the goings on from its beautiful surroundings and welcoming all to its side. The mad, the bad, the rich, the poor, the drunk and the sober although today only those who have nowhere else to go shuffle around in its shade.

I think of those that we will no longer see in the city, those that helped to build and sustain it, however small their contribution, who will no longer cross the churchyard rushing for a Bus or Train, heading to the Bullring or for a swift half in the Troc. Those who will leave a hole that will never be filled, a presence that can never be replaced and numerous broken hearts.

The sun is still shining brightly but it’s time to go home and leave Town to the seagulls.