Conservative councillors Robert Alden and Gareth Moore, who have been leading the regeneration of Erdington campaign, have worked with the Erdington Business Improvement District and Birmingham City Council over the past year to apply for around £12 million worth of funding from the Future High Street Fund programme to transform Erdington High Street.

The Erdington application has received support from a wide range of stakeholders including Witton Lodge Community Association, Greater Birmingham Chambers of Commerce and the Mayor of the West Midlands Andy Street, as well as local businesses and residents. 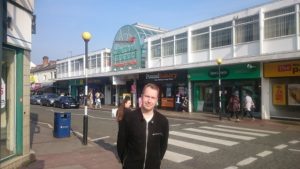 Cllr Robert Alden, a director of the Erdington Town Centre BID, said “It was brilliant news, last year, that Erdington got through to the next stage of the Future High Street funding process, the only application in Birmingham to get to stage two.

“However that was not the end of the process, so we have been working with Council officers, the town centre manager, local community groups, partners and the West Midlands Mayor to pulling together all the details needed to back up the full business case. It has been a real team effort and hopefully this will get over the line and see the money awarded later this year”.

Robert added, “I am delighted that so many partners have come together to help support this bid to transform our high street. It is desperately needed and something we have been pushing for years, the BID manager Terry Guest has done a brilliant job, as have staff at St Barnabas Church, Witton Lodge Community Association, Wayne and Lydia from the Council, Arup and many others have as well and hopefully this final hoop will also be passed then the plans can be delivered and the High Street transformed.”

Robert concluded, “It is vital that the City Council when they agree the submission match our aspirations for the transformation of Erdington. The work to open up and improve the churchyard around St Barnabas Church must include the demolition of the former Poundland store or it will not get rid of the antisocial behaviour that occurs to the back of the site.

“While our plans for additional investment at the Six Ways end of the High Street haven’t been included in the final business case they have not been forgotten and we will be seeking further investment to allow this transformation as well so that will bring together our aspirations to make Erdington a destination of choice not just locally but regionally”.

West Midlands Mayor Andy Street said, “I am in full support of this bid. There is real ambition in these proposals. Erdington has come together behind this bid both from private and the public sector. These places must be clean and green and safe and secure for people to spend time in”.

“The West Midlands Combined Authority is committed to supporting this bid with expertise to help ensure its success should the bid be awarded.”

The final scheme of proposals put forward in the full business case includes:

– Demolition and re-modelling of the central square site to create a restaurant quarter, hopefully a cinema and some residential accommodation.

– Opening up access and the site of St Barnabas church by building frontages to face the side of the church rather than the backs of the building, which have led to the creation of closed off areas that have previously attracted problems.

– Work with Witton Lodge Community Association to transform the former Erdington Baths site into a Business Start Up Hub , protecting the fabric of this historic asset while bringing it back into a new use.

Cllr Gareth Moore said, “Thank you to all the residents who took part in the consultations about the vision for Erdington over the last three years. That data from those responses has formed a key plank of support for the bid, has shaped the details of the proposals and helped demonstrate one of the key criteria that there is local support for delivering change. As always we will be keeping residents updated through the two stage bid process and you can find out more by liking facebook.com/ErdingtonNews“.

The Future High Streets fund is part of a £675 million pot nationally the government announced as part of a range of support for High Streets. Successful bids at stage one get revenue funding to go towards full business case for stage 2 this summer.