Jessica Harris rambles through a quiet but distinctly alive Birmingham. 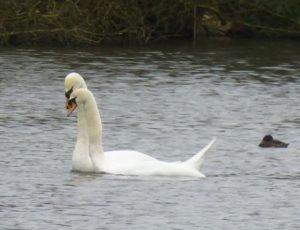 A couple of days ago, I took a walk over the rough texture of Birmingham’s green space – a BoJo stroll as I have come to think of it. A walk I can do with an easy mind since the Government has granted us permission – for now, at least.

At Moseley Bog, I dived into the past. Straddling the brook are two mounds – beneath them a pile of stones cracked from the forces of fire and water used to create Bronze Age saunas. In a clearing are clay pits, which formerly provided fertiliser for local fields.

In woodland near the pond are remnants of gardens from the Victoria era. Here lie foundations of glass houses, plant species popular at the time, vestiges of walls which once enclosed spacious rooms: all evidence of a town expanding into a city. 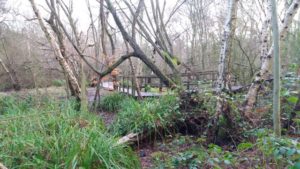 Favoured by many in the suburbs of south Birmingham, the bog holds a charm and a mystery today, as it did for Tolkien some 80 years ago.

Echoes of his fiery imagination, enacted through a world of hobbits and elves, of dragons and orcs, resonate through the woods. It is a place which captivates and intrigues – a place where new corners open up, where art-works appear sculpted in decaying wood, where no pathway ever looks the same, no matter how many times it is trodden.

All the while, there is an unseen presence of living creatures hidden in weed-covered waters, camouflaged in undergrowth or harboured in tree tops.

The bog is a breathing space for the city and its people. A young boy, no more than twelve, passed by, keeping a respectful social distance, though not distant enough to prevent the smell of skunk from pervading the air. Maybe the bog is Tolkienesque for him too.

I walked on. Ahead of me, Swanshurst Park was defiantly in the present. The pool, teeming with bird-life, glimmered in the distance. As I drew close, two swans moved as one, circling clockwise, their wings arched, as if emulating the pas de deux of principals in a ballet. One paused for a second then reversed its direction; the other followed suit. Their courtship dance endured, their co-dependency sealed.

A mallard swam by, maintaining an aloofness, in keeping with the viral times.

Near a bench, four young men loitered and smoked. Each had a mask, worn nonchalantly around a neck, or draped from an ear. There’s an emerging style to these things. Their conversation drew them close, a moment in the sharp sunshine, a sharing of air.

Moving on again, strewn litter greeted me, paying homage to my feet: a takeaway carton, a soft-drink can now drained and crushed, a discarded packet of vaping capsules. A dog walker skirted round me, eyes down, as if a look could kill.

Then, an infant ran by, giggling in the sparkling air, chased by parents also laughing. Maskless, their world was free and untainted, their normality regained for a moment.

On Billesley Common, sports pitches lay unused and exposed. A playground was locked, its swings taped off. Parks staff have been at work, it seems, closing down what they previously opened with pride.

A shoe, an old trainer, lay on the ground – quite large, probably a size twelve. Someone must have left in a hurry, in the need to maintain a distance, perhaps.

On the route home, a white van drove by, two builders in the cab. One had a handkerchief covering his nose, the other had nothing. They shared a joke, maybe a moment of dark humour. The construction industry is alive then, if not well.

Cutting back through the bog once more, a small child approached along the raised walkway. I edged round her cautiously. People, even little children, have become a source of fear.

At eight the same evening I walked out of my house again. On the pavement, I joined the applause for NHS staff, for care workers and for all who are putting themselves on the line to preserve the lives of others.

I met some of my neighbours for the first time, as we called “Hi, nice to meet you,” to each other. A moment of connection, of awareness that we co-exist in the same world.

This is Birmingham. This is the Covid virus.

One thought on “Walking with Covid-19”