Richard Lutz takes his pew for an endearing play about two movie icons. 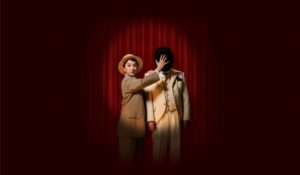 Well, you don’t have to go far to figure out what this sweet little play is about: just take a gander at the title.

It runs something like this. Both Chaplin and Laurel (aka Stanley Jefferson) shared a cabin as they crossed the Atlantic in 1910 as part of the Fred Karno vaudeville show. They toured the States, then parted.

Laurel made much of their trip together. Chaplin never once mentioned Laurel in print. Their joint history, in fact, was two separate views of something that happened before both became big stars.

This play, produced by the company Told by an Idiot, recreates their relationship – or lack of one. It’s an engrossing four-hander in The Birmingham Rep’s studio space, and what really gives it a shine is that it re creates the story in mime – just like the silent movies they appeared in way back.

There is no dialogue, no verbal script, just physical movement, clips of vaudeville songs and a terrific piano score composed by Zoe Rahman filled with ragtime, barrelhouse, and that tinkly silent movie score that pinned down so many silent movies a hundred years ago.

Hats off to a whirlwind Amalia Vitale, playing Chaplin as a tricky little tumbling elf who steals the limelight. Rubber-bodied Jerone Marsh-Reid is the second string Laurel. Other parts are filled by Nick Haverson as Karno and a hard working Sara Alexander as the eve-present pianist.

The quartet never stop moving as they flesh out a dozen roles and push the story forward with slapstick, physical theatre and simple visual gags in this relentless and wordless 90 minute play.

It’s on tonight at The Rep. It’s worth the cash to take it in.