Carlos Acosta has taken a triumphal first step in his new role as director of Birmingham Royal Ballet with a glorious production of Swan Lake. The Cuban dance legend has delivered a stunning showcase for the world-class company with Sir Peter Wright and Galina Samsova’s version of the classical favourite.

The romantic tragedy weaves between reality and fantasy, captivating us with both joy and sadness as we follow the drama in dance of a young prince in love being tricked into breaking his vows with fatal consequences.

Tyrone Singleton gives a strong performance as Prince Siegfried, who falls for the doomed Princess Odette, danced exquisitely and heartrendingly by Céline Gittens. The two gelled perfectly on opening night. Transformed into Odile by the evil sorcerer 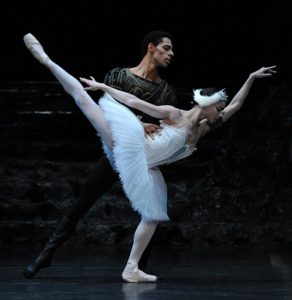 There were gasps too around the auditorium at the opening of Act Three as the curtain rose on a stage rippling as a lake of dry ice from which a flock of swans completely hidden underneath rose up one by one on pointe. The swan ensemble danced throughout with wonderful synchronisation, their arms fluttering and beating like wings and their arms stretched forward like a swan’s neck.

Philip Prowse’s designs bring out the splendour of the Russian Imperial Court, with a gorgeous black and gold colour scheme for both the men in their robes and furs and the women in their crisp tutus and jewel-studied crowns. The imposing sets gave plenty of room for the entire company to display their consummate artistry.

The highest credit also goes to the Royal Ballet Sinfonia. conducted by Paul Murphy, who played the melodic Tchaikovsky score with exuberance and panache.

Swan Lake is the perfect introduction to ballet and as a showcase for what is to come this production by Birmingham Royal Ballet under its new director is not to be missed.

Swan Lake is in performance at Birmingham Hippodrome until Saturday 29th February (tickets and information 0844 338 5000/www.birminghamhippodrome.com)