Dave Woodhall watches a night of old and new colliding.

“Evenin’. ‘Ow y’doin’?” It’s not the most rock’n’roll of entrances but Glen Matlock has never exactly been the showbiz cliche sort. Publicity was thrust his unwilling way once or twice but since then he’s got on with doing what he’s always done – writing good songs and performing them with style and with not a little enthusiasm.

Anyone expecting a punk nostalgia trip would have been disappointed by what was on offer this evening. There were no Sex Pistols songs in the main set, nothing at all from the woefully ignored over the years Rich Kids. Instead there were new 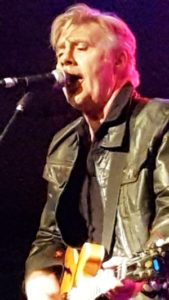 songs, a chunk of Glen’s earlier solo work and one or two covers that showed some of the influences on a man who’s influenced more than a few musicians himself.

It’s always been hard to pigeonhole Matlock’s music and tonight was no exception. Sexy Beast, his single from last year, has a catchy rockabilly feel and there were elements of this genre throughout the set, which went well with the quiff the man now sports. Other songs, the Philistines’ Born Running amongst them, are rockers in the tradition of Glen’s ‘other’ band, the Faces, and that’s high praise indeed.

There’s a song called Magic Carpet Ride, an original rather than the Steppenwolf version, that deals with the uncertain future of the country’s political situation, while Can’t Be Myself (and excuse the ignorance, but I was unsure whether it was one of Glen’s or not) had a northern soul feel to it that did, as the man himself suggested, bring back echoes of the original and best version of Tainted Love.

Back in the rockabilly groove there was a rendition of the Richard Hell song Blank Generation re-worked in the style of the Stray Cats, Hook In You is an awesome blues number reminiscent of Screamin’ Jay Hawkins and Scott Walker’s Montague Terrace is a longtime favourite in the Matlock set. Forget labels, the best way to describe this music and the way it’s delivered is ‘quality’. As the songs continued, Earl Slick does what he always does, playing guitar with the power and grace of a man who’s been around forever and performed with some of the best while the rhythm section were as tight as anything either man has played with.

The main set over, there was naturally a return to the stage and the loudest response of the evening was for the opening bars of Pretty Vacant. As ever, it’s sung from start to finish word-perfect by everyone in the audience; credit to Glen and the band for keeping the song fresh when we must be approaching the ten thousandth time he’s played it live.

The Small Faces All or Nothin’, another old faithful from the Matlock setlist, closes the evening’s entertainment to an enthusiastic reception from a crowd that themselves deserved some applause for not demanding the old favourites throughout. It would be easy for Matlock to get up on stage and do a runthrough of the Sex Pistols back catalogue; instead he remains as innovative, and as well worth watching, as ever. If you get the chance to catch this tour grab it with both hands.

And if you wanted an undiluted dose of nostalgia you’d have enjoyed the opening act, Year Zero, a band of middle-aged punks whose musicianship was reminiscent of the more intelligent end of the late seventies spectrum – think the Rezillos and Glen’s old mates the Professionals – with lyrics that bemoan the dilemma of growing old while not growing up. Now that’s punk rock.