By their own admission, brother and sister Andrew Berry and Vicky Newhouse do not fit the mould of ‘sporty fundraisers’.

“I would never have described us as athletes, and still don’t,” says Andrew with a laugh.

Now, after an incredible year of pushing their bodies to the limit via a series of gruelling and arduous challenges, many people would beg to differ.

Andrew and Vicky’s Mum Carolyn sadly passed away from leukaemia last year at the age of 66, having first been diagnosed six-and-a-half years previously. Carolyn had been treated by Cure Leukaemia co-founder Professor Charlie Craddock CBE at the Centre for Clinical Haematology at Birmingham’s Queen Elizabeth Hospital, and was always hugely appreciative of the care that she received from all the clinicians and nurses.

And so, when deciding on the best way to pay tribute to their Mum, it was decided to not only carry out a series of serious physical challenges but to fundraise for Cure Leukaemia to help provide a similar level of care for patients in the future.

Their roll of honour when it comes to the events covered is impressive, and has raised a fantastic £4,500 for Cure Leukaemia.
The Touch of Turquoise challenges, so named in memory of Carolyn’s favourite colour, comprised both Andrew and Vicky taking on the ultra-marathons of Race to the King (86km) and Race to the Stones (100km), as well as the Sandman Triathlon and RNLI Portsmouth 10k run. 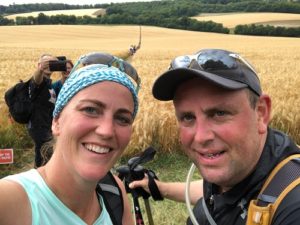 “Looking back now, it is really satisfying to think about what we have achieved, but some of the challenges have been extremely tough,” says Vicky, who works for the UK’s Air Traffic Control provider NATS, based near Portsmouth and Southampton.

“The ultra-marathons are without doubt the hardest things I have ever done – harder than childbirth. They were physically hard, but even more mentally hard, and I got to within 5k of the end of the one of the courses and was ready to give up.

“Yes, I was ready to tell the event organisers that their medal wasn’t worth it, having got to within three miles of the end having already completed about 49! It was a proper hissy-fit!

“But very quickly I realised that I couldn’t give up. Cancer patients don’t get the chance to give up, and I just had so summon up all my grit and determination to walk to the end.

“Our feet have never been so poorly in all of our lives and I ended up with a huge blister and lost two toenails – I couldn’t walk the next day! But now, having completed everything we have signed up to do another Ultra next year. The sense of satisfaction it gives you is amazing.”

Andrew, who works as a chartered surveyor for Cushman and Wakefield in Birmingham, concurs. “The challenges have certainly had their difficult moments,” he recalls.

“During one of the Ultras, I actually went into shock, and we thought it was ‘race over’, but I managed to effectively sleep-walk my way to the finish line!

“The swim in the triathlon was also quite an experience, but that took place in a beautiful part of the world and a place which Mum loved to visit, so it was inspiring from that perspective. he atmosphere was also amazing, and that is the big thing about these events, everyone really helps and supports each other to get everyone through.”

That team effort extends well beyond just Andrew and Vicky, and indeed Charlotte, with so much more support from friends and family. And that is particularly poignant given the motivation behind the event-packed year.

“When you are dealing with grief, you never quite know what it is going to be like and how that particularly journey will go,” adds Vicky, who used to spend a lot of time with her Mum in and around Portsmouth.

“Even in training, it got me out and about in the fresh air, and at the events there were moments of crying, laughing, smiling, remembering, and it gave me time to grieve. It also helped us as a family to really come together, and we had just the very best crew.

“My Dad is officially awesome, and he would come and support us, and we got to spend some real quality time as a family, remembering Mum and all the amazing things that we had done. “

“So many people supported us and it was way bigger than just Vicky, myself and Charlotte in terms of the fundraising,” added Andrew.

“My wife, Sarah and another friend joined in the Great North Swim and the Portsmouth 10K, Dad has been carting us around the country to the events, something he thought would have stopped doing after school and Chris, Vicky’s husband, has been amazing with all his support and ‘advice’. We even managed to get Granny – our Mum’s Mum – now in her 90’s to watch at Trearddur Bay.”

And ultimately, it was all about the fundraising, with Andrew and Vicky visiting the Cure Leukaemia offices at the Colmore Building to officially hand over the £4,500 donation.

“We are both so grateful to Cure Leukaemia and everything they did for Mum,” added Vicky. “She loved the nurses and would take trays of lemon drizzle cake into the hospital, and the care she received made things more tolerable.

“Those nurses and the hard work they put in would not have been possible without Cure Leukaemia. We have been so blessed and humbled by the support and just blown away by everyone’s generosity.”