Richard Lutz takes his pew for a feel-good musical about change and friendship. 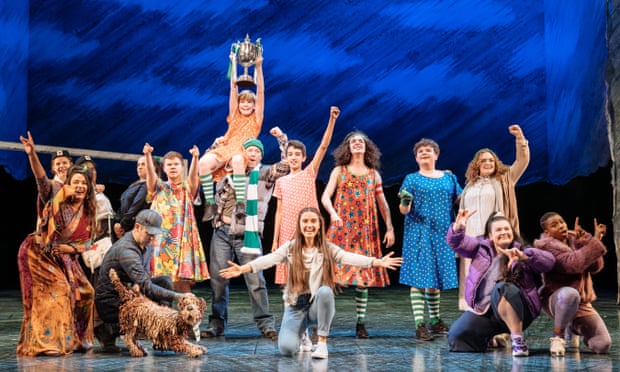 Welcome to the world of Walliams and Williams. That’s David and Robbie, to you and me.

The former wrote The Boy in the Dress more than a decade ago. His novel is now a play. And Robbie W. has penned the music and lyrics.

It’s a theatrically conventional story about a 12 year old from a broken home who must find his own way. He finds solace and intrigue in putting on a dress.

The result, at the RSC’s main theatre in Stratford, is a kind-hearted production enjoyed by both adults and the school kids in the audience. The former liked the plot development and issues of choice. The latter liked the fart and bathroom jokes and the live music. And now that we live in a culture that has embraced crossdressing celebrities such as Eddie Izzard and Grayson Perry, it’s also a play that reflects who we are and how Britain has changed to a certain extent.

In the revolving castlist, Jackson Laing took on the role of 12 year old Dennis who is a star striker on his school team but faces anxiety and loneliness when he yearns to try on pal Lisa’s orange spangley number. With a wig and cute beret, he hesitantly but bravely heads for school and the world of cross dressing. 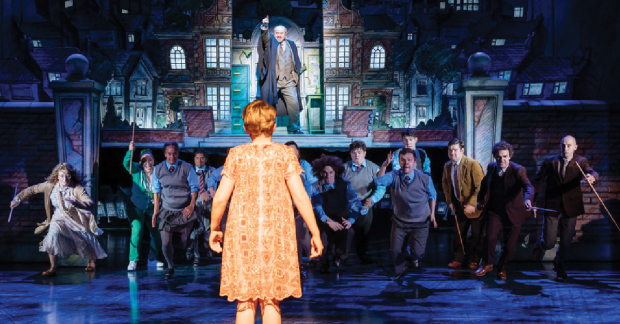 And with that comes derision and pain. He suffers the jeers and sneers of his fellow classmates, his teachers, his evil headteacher (an eyepoppingly standout performance by Forbes Masson), his own father and even his team mates who love his goalscoring but aren’t too impressed with his female fashion.

His only real ally is pal/girlfriend Lisa who not only helps him in his changes but, in a likeable plot twist, saves the day when he appears on the field in his female wardrobe.

… a well crafted, well balanced play about a sensitive subject…

Lisa was played by Miriam Nyarko on the night I was there and she’s blessed with a fine voice and great sense of stage confidence as she hits the high notes of the score written by Robbie Williams and collaborator Guy Chambers. All this is framed by an arresting set design by Mark Henderson with layers of cityscapes to add depth to the Stratford stage.

My guess is that this well rounded but standard play is headed for London once the Stratford run ends on 8th March. And this means it’ll pluckily follow the RSC’s previous child-based production, Matilda, which has had  so much success.

In effect, this musical of the 2008 novel  is good value for the RSC ticket prices and you can take the kids for a good night out. Walliams, Williams and the RSC  have delivered a well crafted and well balanced, if not safe, play  about a sensitive subject and they are on track for having a West End hit on their hands.