So, hey presto, what better way to commemorate this LP than to get Dweezil (aka Ian Donald Calvin Euclid Zappa) to re-create his dad’s music half a century later.

The kid (well, the fifty year old kid) performs it note for note. Even the stuff that his late father produced in the studio but never live. It’s a finely tuned performance of material from a half a century ago. 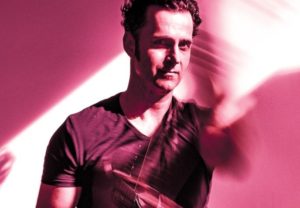 So you get the emblematic (if non-PC) Willie the Pimp, first sung by Captain Beefheart, and a host of other jazz influenced instrumentals that peppered Hot Rats: Peaches en Regalia, It Must be a Camel, Son of Mr Green Jeans and Gumbo Variations.

Zappa Jnr is a fine guitarist and he’s ably backed up by a five piece unit studded with multi-talented pizazz. Horn player Scheila Gonzalez, for instance, plays all reed and brass instruments plus guitar and keyboard. No wonder this group grabbed a Grammy for their retro-work.

Hot Rats, as promised, is the first half of the session. The second half is diminished by a composite run through of some of Zappa Snr’s huge back catalogue. Vocals, which can be absurd and cute (one song is about dental floss), are drowned out at times by the huge rock sound.

And some of the solos border on derivitive and just plain too loud. But the Zappa feel is there: a gleeful mix of doo-wop, surfer tunes, gospel, soul and just plain clowning around. All the material is Zappa except for one interlude where My Sherona is given a welcome outing.

So, overall, Dweezil delivers. You do get Hot Rats. And for the packed Town Hall fans, that was enough.