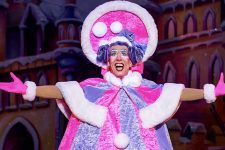 Buckle up, it’s time for the panto.

And you know what that means. The Hippodrome always pulls out all the stops for its mega sell-out extravaganza.

This year it’s a rollercoaster of a production, with lots of ups and downs, awash with ad hoc ribaldry and chaos from frontman Matt Slack as cheeky servant Muddles. He devours the stage when he’s under the lights, delivering madcap schtick to the beaming audience but sometimes close to a theatrical car crash about to tumble over a precipice.

Luckily, the show is grounded by Lesley Joseph (late of Birds of a Feather) as the evil queen Dragonella who is out to destroy ingenue Snow White played by Faye Brookes (Coronation Street). Does Dragonella succeed with the help of flying dragons and surfeit of smoke and fireworks? Pay your money to find out.

That’s really all you need to know in this hallucinatory show. Saucer-eyed Matt Slack notwithstanding, this bonkers production roars ahead, sometimes without any brakes, at 110mph producing laughs, double entrendres and incomprehensible plot turns, much of it on target but some of it veering close to ad-lib mania.

Nevertheless, this is panto season, after all. And the audience, many of them families out for a laugh, gleefully lapped up the nonsense. Brookes has a fine voice; Joseph is as evil as a comic book bad girl can be and Joe McElderry (X Factor winner a decade ago) has a fine pair of pipes as he’s summoned up somewhat bizarrely as the Spirit of the Mirror. Andrew Ryan (above) gets the best costumes as goodhearted panto dame Nanny Annie Aspiri  and, as a drag queen, does get a gold star for the best gargantuan bustline in this year’s season, producing uproar with every rubbery wiggle and mammary bounce.

Slack, as the motormouth compere, takes dubious control and someone in the directorial team has taken the muzzle off. He is high-jinks personified- sometimes hilarious, sometimes tedious, but happily never overshadowing a crazed, noisy production delightfully designed by Ian Westbrook and 3D Creations. The show runs until 2nd February.