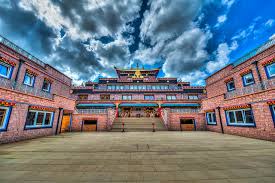 There is a niche in a cabinet where the remains of K lie. She died this summer and despite a long life travelling and working, she wanted to rest in her native Scotland.

As a Buddhist it seemed natural that she would choose Samye Ling Monastery in southern Scotland. It is tucked into quiet hills near Lockerbie and, in a little valley, the Tibetan Buddhist order- and its teachers, monks, students and communicants- live. The temple dominates (see above) and a final ceremony inside blessed the life of K as she rested in what the Buddhists call the Bardo – what they see as a transitional stage between death and re-birth. 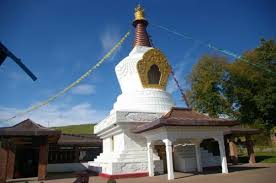 Prayers were recited and then her ashes, along with others, were taken to a giant memorial stupa (above) set on the edge of a lake. A box with some of K’s remains were placed in a niche under a gold statue of Buddha and the rest were placed inside a long glass  cabinet embracing three sides of the stupa. There they will lie until they are spread among the quiet acres that this Buddhist community has cultivated, built upon, prayed on.

The October weather was breezy and clear. Warmth had left the hills. We left the monks in their red robes and headed home. It’s time to pick apples. It’s an annual ritual. We had started with five big old trees more than three decades ago. Slowly they mostly died off. Only two are now left. 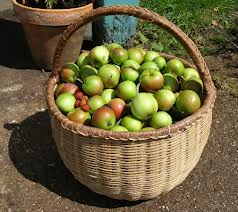 The harvest this year is weird. It is scant, most fruit has fallen early or is dying on the branches. But only on the west side of the trees. The eastern branches are full and heavy with apples. We don’t know why. Was it disease? Too wet? Too windy? Too hot? Too cool? All the above? None of the above? It’s a stark contrast to last year, when the pickings were abundant and we had too much and just left the fruit on the front wall of the house to be taken away. All disappeared within a couple of days – someone likes apples.

What we have will be used. The meagre harvest will become apple butter (made with cider), apple sauce (freezes well) or a garnish concoction made with chilli to go with almost anything. The house will be suffused with deep apple fragrance for weeks and will herald the coming of winter. Just as it has for more than thirty years.

One thought on “What autumn brings”