Deception and its unhappy consequences are the driving force behind the great romantic ballet Giselle.

Two young lovers dance and interact in joyful innocence, yet we soon discover only one is true as a peasant girl is unknowingly being betrayed by a betrothed local aristocrat. 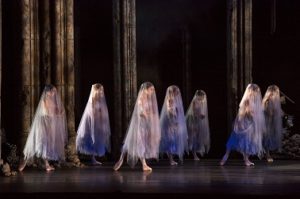 As Momoko Hirata’s Giselle looks longingly into the eyes of César Morales’ duplicitous Count Albrecht, you cannot help but notice parallels to today’s sexual politics even if Morales’ subtle performance shows he is in more than just a dalliance.

Indeed, the early scenes between them were danced exquisitely with a great sense of chemistry, and Morales’ excitement at the relationship could not have been more pronounced than with his thrilling high-kicking skills.

Of course, as mother always knows best, Marion Tait’s deft Berthe does her best to steer her daughter away from the suspicious-looking Albrecht towards the more suitable local forester Hilarion, danced in the role by an admirably jealous Kit Holder.

But the show belongs to the ladies – or rather the ghosts of young women who have died as a result of being jilted before their wedding day.

Samara Downs as a merciless Queen and her ensemble of young dancers dressed in ghostly luminous wedding dresses gave an emotionally powerful bravura performance dancing men to their death in the unhallowed grounds of an eerie ruined church.

But the show offers more than sadness and gloom. Miki Mizutani and Tzu-Chao Chou danced a jolly grape harvest pas de deux, while a splendid white horse made an appearance carrying the local duke’s daughter in all her medieval finery. In fact, the horse remained on stage to the point when it was beginning to become a distraction before being led away seemingly sooner than intended.

The memorable melodic score was performed with its usual clarity and reliability by the Royal Ballet Sinfonia under the baton of Philip Ellis.

This is a highly recommended production even if you shouldn’t expect a happy ending. Let’s hope that David Bintley ballets continued to be performed by Birmingham Royal Ballet once new BRB director Carlos Acosta officially takes over the reins from the world-leading choreographer in January 2020.