The chocolatiers at Cadbury World have unveiled their latest creation – a homage to Bournville, famously founded by Richard and George Cadbury, to celebrate the 100th anniversary of Bournville Works Housing Society.

The incredible scene was produced over three days by chocolatiers Dawn Jenks and Gail Deeley and stands at an impressive 80cm tall and weighs around 30kg – the equivalent to 666 standard bars of Cadbury Dairy Milk. 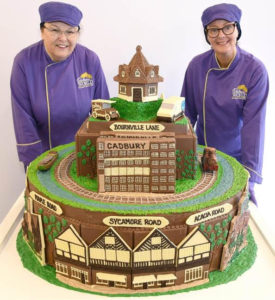 Dawn and Gail honoured local landmarks such as Selly Manor Museum, the Bournville Carillion, the Cadbury factory and traditional half-timber fronted shops found in Bournville, using plaques hand piped with milk, white and dark chocolate. A barge packed with milk churns and a Cadbury train have also been carefully hand-sculptured out of chocolate, adding to the delightful scene.

The Rest House and Bournville Works Housing Society were then produced with hand-decorated individual pieces, which have all been fixed to the creation using melted milk chocolate.

Each masterpiece has been carefully secured to a three tiered chocolate structure. Bournville road signs, hand-piped trees and a canal add the final flourishes.

The creation will be on display at Bournville Village Trust’s office on Saturday 14th September as part of the Bournville Heritage Open Day, before returning to Cadbury World’s Chocolate Making zone.

Founded in 1919, Bournville Works Housing Society, now part of Bournville Village Trust, was established to provide housing specifically for employees of Cadbury Brothers Limited. By 1928, the Society had built around 350 homes for employees across Bournville.

“We’re delighted to be a part of the celebrations for Bournville Works Housing Society, supporting our wonderful community on this incredible milestone.”

Theresa Gordon, Community Services Co-ordinator at Bournville Village Trust, said: “As part of the anniversary celebrations, residents really wanted to celebrate what they’ve named ‘the sweet life’ of living in Bournville and what better way of doing that than through chocolate.”

“The creation will sit alongside an exhibition of some never before seen archive photographs of Bournville, all put together by the Bournville Society and residents, and a fantastic poem about life in the village, written by residents with poet Dr Philip Monks. It’s an event not to be missed and we would like to thank Cadbury World and the Bournville Society for all their hard work and help in making the celebrations so special.”

Cadbury World visitors can catch the talented chocolatiers in action where they can take a delicious taster for themselves in the Chocolate Making zone, before practicing their piping skills by drawing their name in chocolate in the Have A Go zone.

For more information and to book tickets to Cadbury World, visit www.cadburyworld.co.uk