Students introduced to the heritage of the city’s music scene.

First year students on the UK’s first Birmingham-focussed music industries degree course have been given an introduction to the city’s vibrant music landscape to mark the beginning of the three-year programme.

Along the route, students were introduced to music industry professionals from Tiger Bam Communications, The MJR Group, Brum Radio and Birmingham Music Coalition, who shared advice and insights on the city’s music industry ecosystem. 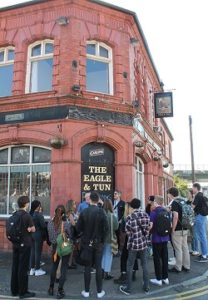 Matt Grimes, Degree leader in Music Industries at Birmingham City, said, “We’re delighted to be delivering a bespoke degree course built around the strengths of the vibrant music industries in Birmingham, which support up to 6,000 jobs and help generate up to £230 million worth of income to the area.”

“We wanted to kick it off with a practical exploration of the city’s live music landscape covering everything from famed backstreet punk and metal haunts to one of the world’s best concert halls. At Birmingham School of Media we have decades of experience in delivering Music Industries-based education and research. We’ve drawn upon this to develop a contemporary and focused course that both draws on and contributes to the city’s rich and uniquely varied music industries.

“Birmingham’s oft-overlooked music scene is currently seeing a boost through the influx of new promoters, venues, festivals, investment and interest, supported by organisations like Birmingham Music Coalition helping to connect and empower those working in the sector. We have ambitions to grow the course alongside the rapidly expanding talent in the city-region. We want our graduates to remain in the city and continue contributing to Birmingham’s music scenes. Developing meaningful and productive relationships with music industries in this city will continue to support that.”

Up to twenty young people from across the country have enrolled on the hyper-focused BA Music Industries course which promises to put students at the heart of music in the UK, with coursework designed to equip them with the skills, knowledge, and experience, not just to work in, but to shape the music industries.

Over the next three years, these students will be getting to grips with the industry locally, working with a host of local organisations such as those mentioned above, while also keeping an eye firmly on the national music industries, working closely in partnership with UK Music, who represent the interests of the UK’s music industries nationally. Birmingham City University is a member of the UK Music Music Academic Partnership network, and has appointed Mulika Sannie, Vice President of Business Affairs at Kobalt Music, to the programme’s industry advisory board.

Graduates from the music industries offering at Birmingham City University have gone on to take up roles at Kobalt Music, PRS for Music, Resorts World Arena, Sony Music and Universal Music, as well as creating new programmes, curating new events and producing new music journalism and PR within and from the city itself.

Birmingham City University’s music output also includes composition, performance and research at the globally-acclaimed Royal Birmingham Conservatoire, music education teaching and research in the School of Education and Social Work, music technology and sound production at the School of Computing and Digital Technology, and the Popular Music Research Cluster at Birmingham School of Media.